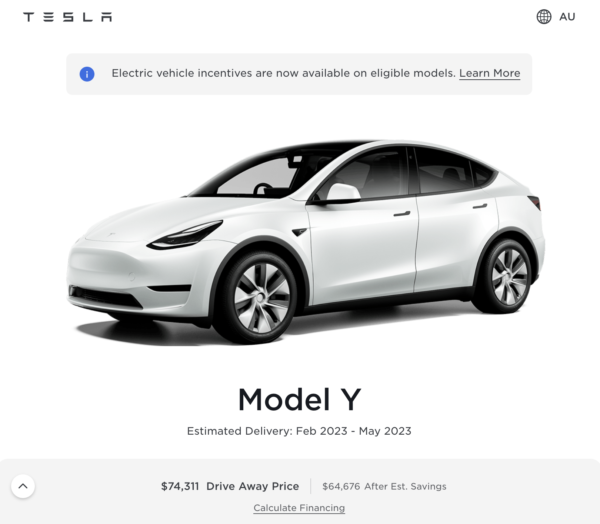 The Tesla Model Y finally arrived in Australia last week, and after going on sale, demand for the electric SUV is skyrocketing.

Demand for Tesla’s Model Y in Australia has pushed the delivery timeline for new orders as far out as February through May 2023, according to the company’s website and as reported by TechAU.

While the Model 3 has also seen strong demand, it’s noteworthy that most Australians prefer an SUV — making the Model Y the perfect pick for many looking to go electric.

Tesla launched Australian Model Y orders on Thursday, and in under a week, the company’s delivery timelines have pushed past the end of this year.

Many in Australia have awaited the launch of the electric SUV since last year, with Tesla getting the Model Y approved for sale last September — hinting at an imminent launch.

In April, fans expected the launch to be imminent once again after the Tesla Model Y’s pricing in Australia was leaked.

Tesla’s Model 3 was the best-selling EV in Australia in this year’s first quarter, taking 65 percent of the EV market share.

Electric vehicles (EVs) are becoming more popular in Europe with each passing quarter, and a new milestone has been reached with one of Tesla’s EVs at the forefront. The Tesla Model Y led Europe’s EV sales year to date through August, with 7,011 units of the electric SUV sold in the month, according to CleanTechnica. […]
Peter McGuthrie
8 mins ago

According to Bloomberg’s Ed Hammond, Elon Musk has apparently decided to proceed with his deal to buy Twitter at $54.20 per share. The news halted trading of Twitter’s shares on the stock market. Scoop – N*MUSK SAID TO PROPOSE TO TWITTER TO PROCEED W/ DEAL AT $54.20 — ed hammond (@EdHammondNY) October 4, 2022 Twitter […]
Sarah Lee-Jones
18 mins ago

After Tesla’s shares dropped following fewer deliveries than expected, but one investing firm saw the moment as an opportunity. Cathie Wood’s investing firm Ark has purchased more Tesla shares across multiple branches, as detailed in a report from Barron’s. The purchase came after Tesla’s stock dropped despite its record deliveries in Q3, that missed Wall […]
Peter McGuthrie
35 mins ago