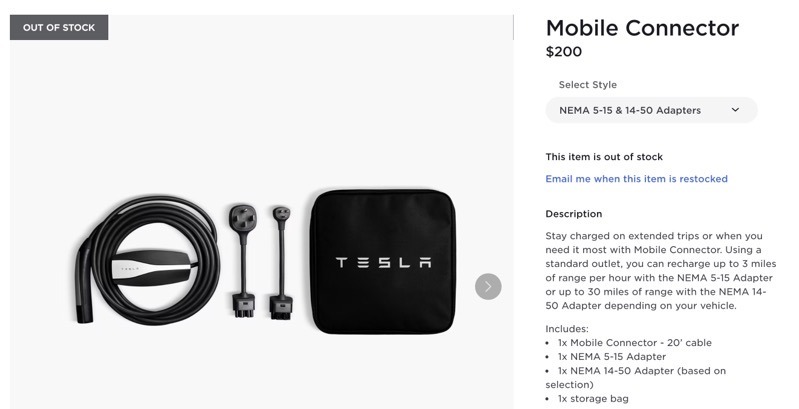 Tesla has launched its new cheaper $200 Mobile Connector, after recently announcing new vehicle purchases would not include a Gen 2 Mobile Connector, that offers charging via a regular household outlet, a decision that has resulted in mixed opinions by the company’s customers.

“Stay charged on extended trips or when you need it most with Mobile Connector. Using a standard outlet, you can recharge up to 3 miles of range per hour with the NEMA 5-15 Adapter or up to 30 miles of range with the NEMA 14-50 Adapter depending on your vehicle,” explains Tesla.

There’s an option to get only a NEMA 5-15 adapter, or an additional 14-50 adapter for the same $200 price. The Mobile Connector is out of stock.

The automaker also says, “Vehicle orders placed on or after April 28, 2022 will not include a Mobile Connector with delivery. Mobile Connector orders with both NEMA 5-15 Adapter and NEMA 14-50 Adapter will begin shipping in August 2022.”

Previously, Tesla’s order deadline to include a Mobile Connector was April 17.

Also new is Tesla’s Wall Connector, slashed in price to $400 again after a recent price increase (was $495).

The discount is likely to help alleviate pressure for new owners as their cars won’t include a charger, and they will either need to buy the $200 USD Mobile Connector or spend double for the Wall Connector.

With Tesla’s AI Day coming up on Friday, many onlookers are wondering what special announcements and new updates the event could hold. After tweeting the AI Day 2022 poster on Wednesday, Tesla CEO Elon Musk shared a few more details about the event. @ElonMusk retweeted the Tesla AI Day 2022 poster, adding that the event […]
Peter McGuthrie
8 hours ago