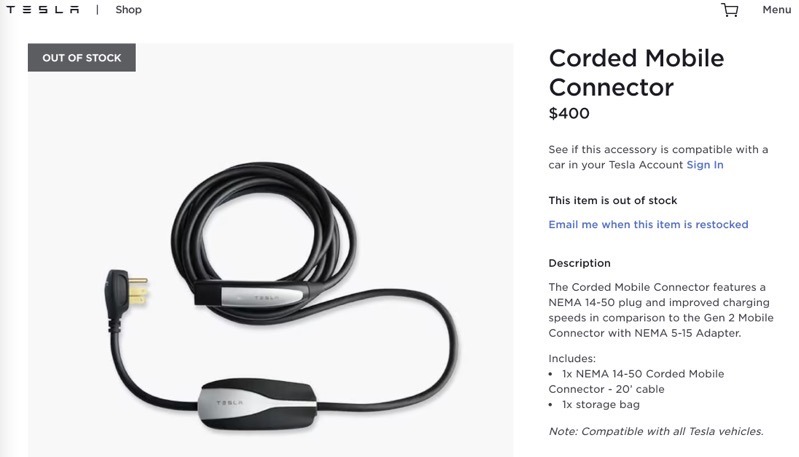 Following significant pushback against Tesla’s decision to remove the complimentary Corded Mobile Connector from new electric vehicle (EV) purchases and instead sell it as a standalone product for $275 USD, company CEO Elon Musk says the company will slash the price to soften the blow.

“We will drop mobile connector price to $200 & make it easy to order with car,” Musk said in a tweet late Saturday evening.

Based on feedback received, we will drop mobile connector price to $200 & make it easy to order with car.

Note, mobile connector is not needed if you have a Tesla wall connector or to use Superchargers.

Musk confirmed Saturday afternoon that new Teslas would no longer come with an included Mobile Connector for charging due to “super low” usage statistics, which made the addition “wasteful.”

Usage statistics were super low, so seemed wasteful. On the (minor) plus side, we will be including more plug adapters with the mobile connector kit.

The Gen 2 Mobile Connector bundle used to come included with every EV you ordered from Tesla.

The Mobile Connector can actually charge a Tesla slowly enough to be a viable option for daily charging if you’re not a heavy commuter, and it particularly comes in handy during long road trips or in regions with lackluster charging infrastructure. It’s pretty much like a tire jack — you don’t need one until you do.

That being the case, Tesla owners and enthusiasts argued that the EV maker should either reverse the decision or at least offer the Corded Mobile Connector bundle as an optional, free add-on in its vehicle configurator.

Please reverse this decision. Mobile connector is a basic piece of equipment for every and any electric vehicle and one of the main advantages of having one, ie: you can charge anywhere.

You should offer it for free for those who need it if you’re not going to reduce the cost of the car. It’s the right thing to do

A $75 drop in price is neither of those, but it is certainly a step in the right direction.

The Gen 2 Mobile Connector is still listed for $275 on Tesla’s online store at the time of writing, but it is also currently out of stock. The product page should be updated soon, if not when the connector actually comes back in stock.