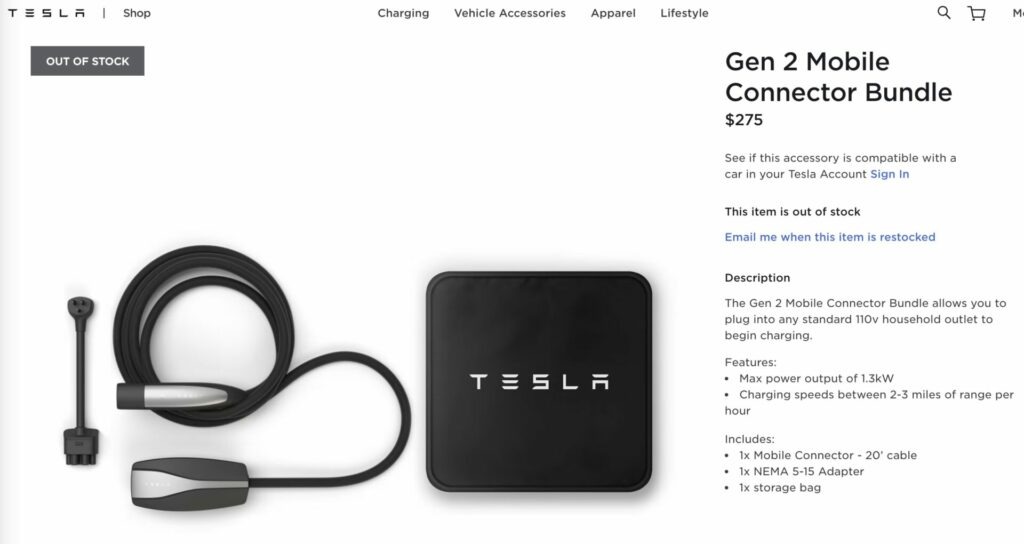 The company’s website made changes today, as spotted by @Tesla_Adri, to no longer indicate the Mobile Connector comes with purchases. Instead, a price of $400 USD is indicated for the Corded Mobile Connector with a fixed 14-50 adapter.

The Gen 2 Mobile Connector Bundle that was included with all Tesla purchases is currently listed at $275 USD.

Tesla just updated the website. The mobile connector is no longer included with a new car. They now list a price for the connector rather than saying "comes with vehicle".

Guessed correctly what the change in the configurator means. https://t.co/IieebFQLUu pic.twitter.com/MBWfUzsdGv

Musk confirmed the change in a reply to @WholeMarsBlog, saying, “Usage statistics were super low, so seemed wasteful. On the (minor) plus side, we will be including more plug adapters with the mobile connector kit.”

For new Tesla customers, the Corded Mobile Connector is the easiest way to charge your vehicle, if you don’t have local charging options available. It also acts as a last-minute resort backup charging option on road trips for trickle charging.

The decision to remove the mobile charging connector seems like an Apple move, such as when the company stopped including an AC adapter with iPhone purchases.

This happened to me too. Tesla hpwc was out of stock 3 months as we got our new car. We charged off a wall outlet using our mobile connector for 3 months until the wall connector (tesla hpwc) was installed.

Please reverse this decision. Mobile connector is a basic piece of equipment for every and any electric vehicle and one of the main advantages of having one, ie: you can charge anywhere.

You should offer it for free for those who need it if you’re not going to reduce the cost of the car. It’s the right thing to do

Along with low usage statistics, the decision to axe the Corded Mobile Connector may be due to supply chain constraints, which is affecting all automakers and other industries.

Tesla should at least offer this Corded Mobile Connector as an option at check out, to be included with the car. Not all cities and towns have charging infrastructure, and hiring an electrician to install a Level 2 charger can cost hundreds to thousands of dollars. For those that do not drive often (such as those that do not commute for work), the Corded Mobile Connector is able to suffice as the only source of vehicle charging.

At this time, it’s unclear if the lack of included Corded Mobile Connector is only for new purchases moving forward, or if it applies for vehicles that have still yet to be delivered.

Update: Musk says Tesla will now drop the price of the mobile connector bundle to $200 USD from $275 USD (it’s currently out of stock):

Based on feedback received, we will drop mobile connector price to $200 & make it easy to order with car.

Note, mobile connector is not needed if you have a Tesla wall connector or to use Superchargers.

The U.S. Securities and Exchange Commission (SEC) has launched a probe into Elon Musk for his role in directing the branding around Tesla’s self-driving car ambitions — reports Bloomberg. According to the publication, the efforts are part of the regulator’s ongoing investigation into Tesla’s claims surrounding its Autopilot and Full Self-Driving (FSD) features. SEC officials […]
Nehal Malik
2 hours ago