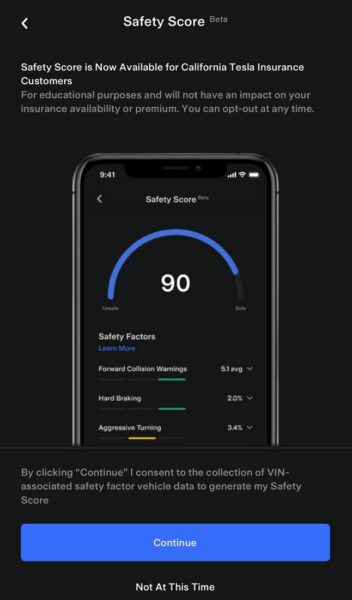 Tesla’s insurance policies in California are getting Safety Scores, though the company says they are “for educational purposes” and won’t affect insurance premiums, according to a screenshot from a user shared on Thursday (via Reddit).

The page calls the feature a beta for California users, and it also says that users can opt out of the service at any time.

On the company’s insurance website, it says “Insurance based on real-time driving behavior now available in Illinois and Texas,” though it doesn’t include California.

In other states, the monthly premium can be determined by the driver’s Safety Score, with safer drivers gaining lower premiums than those who are less safe.

While Tesla launched its insurance program in October, the unique premium Safety Score system is not allowed in California due to previous data privacy cases in the state.

Tesla insurance launched in Illinois in December, after already being available in California and Texas. The insurance program from Tesla also expanded to Arizona and Ohio in January.

Underwriting has begun for Tesla insurance to expand to Oregon and Virginia, per a report from earlier this month.

Following a wider U.S. rollout of the feature, Tesla also plans to expand the insurance program to Europe.

Long-term vehicle subscription service Autonomy has launched an end-of-year sale that lets users subscribe to a Tesla Model 3 for what it is calling the “lowest price anywhere” for the electric sedan. Customers need to put down a $3,000 deposit and then pay $450 per month for the first 12 months, said Autonomy earlier this […]
Peter McGuthrie
19 hours ago