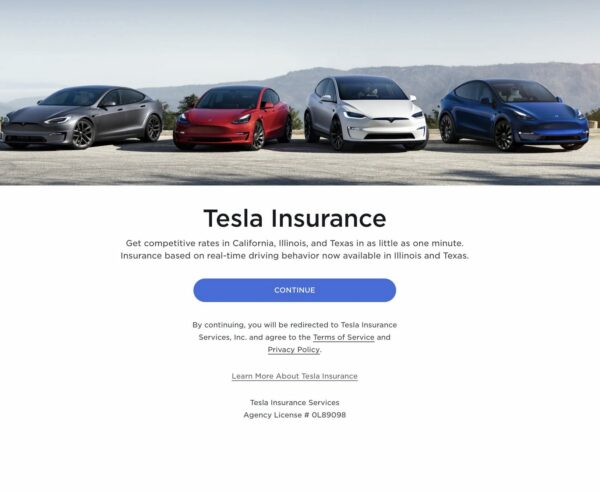 Tesla’s safety score-calculated insurance program is launching in multiple states across the U.S., and a new rumor holds that it will be expanding to a few more in the months to come.

Tesla Insurance is expected to expand to Arizona and Ohio as soon as next month, according to information shared by Tesla insider Sawyer Merritt on a segment of Dave Lee on Investing released Thursday.

In addition, Merritt says an additional three states will also gain Tesla insurance in Q1 2022, though he says he doesn’t know which ones as of yet.

Yep! A total of 8 states will have it by the end of Q1! Exciting times!

Tesla insurance launched in Illinois this month, making it the third state with the program after California and Texas.

In terms of other news and what to expect from Tesla next year, Merritt also said that Tesla will begin offering 401k contribution matching for its employees starting on January 1, 2022.

The contribution-matching program will match 50 percent of the first six percent of an employee’s compensation, up to a max limit of $3,000 annually.

Earlier this month, Tesla also added the ability for insurance policy holders to manage their claims directly from the mobile app.

You can see the full video featuring Merritt and Lee about what to expect from Tesla in 2022 below:

Tesla’s Gigafactory Texas is reportedly aiming for 75,000 units of the Model Y in the first quarter of 2023, according to an unnamed source who shared the information with electrek. The figure equates to more than 5,000 units per week at the site for the entire quarter, marking a significant production increase from the 1,000 […]
Peter McGuthrie
4 hours ago

Although Tesla currently remains the top electric vehicle (EV) manufacturer in the U.S., a new study shows that increasing competition is slowly chipping away at the company’s market share. Tesla has a 65 percent EV market share in the U.S. in the first nine months of 2022, which is down from 79 percent in 2020, […]
Peter McGuthrie
6 hours ago

As Tesla heads into the final month of the year, the automaker is looking to boost customer orders with a new discount option for its flagship sedan and SUV models. Tesla is offering a $3,750 discount on Model 3 and Model Y orders in North America, as seen in a text message sent from the […]
Peter McGuthrie
6 hours ago