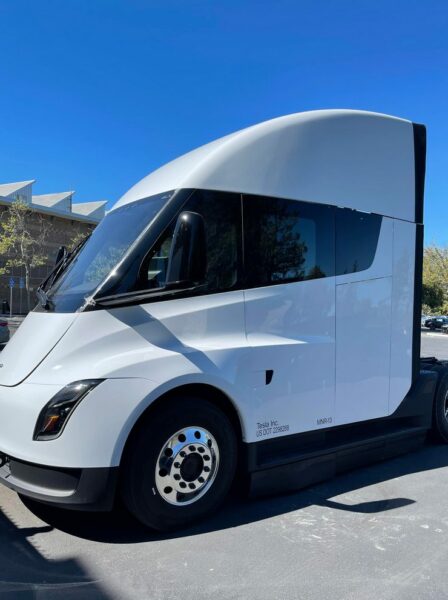 Tesla’s upcoming electric Semi has been on the public’s mind for years now, and as the vehicle gets closer to coming to fruition, users are seeing the truck around in the wild.

A Tesla Semi was spotted in Palo Alto, California as shared in a photo posted to Reddit on Tuesday.

The photo shows a close-up of the electric semi-truck, with no trailer attached to the back.

One user noted that Tesla uses its Semis to deliver materials from the Fremont factory to its Nevada factory, which the user says helps with both material transport and research and development of the Semi through use.

Earlier this year, Tesla CEO Elon Musk confirmed that production of the Semi would not take place in 2022, with earliest projections holding that substantial production will begin in 2023.

Still, that hasn’t stopped users from catching glimpses of the Tesla Semi at the Nevada factory, with the facility reportedly beginning limited production of the Semi late last year.

Tesla built four Megachargers at the Nevada factory for charging the massive electric Semi, with a factory drone flyover earlier this year showing off the Semi facility.

In addition, Tesla was awarded a patent for an automatically inflating tire system for the Semi just last month, not unlike those seen in many military vehicles and other heavy-duty trucks.

Tesla on Friday held its annual AI Day event to showcase the company’s latest leaps in Artificial Intelligence, automation, and computation. The event kicked off with Tesla showing off the first working prototype of of ‘Optimus,’ the long-awaited Tesla Bot. Despite merely being a prototype, Optimus was able to walk out on stage, wave to […]
Nehal Malik
58 seconds ago