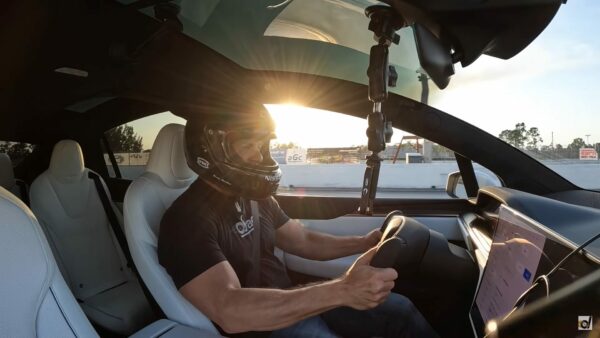 Just as Tesla begins delivering its first versions of the Model X Plaid refresh, one owner and driver shows off how quick the electric SUV actually is.

In the video, the crew calls the vehicle the quickest and most powerful SUV in the world, before setting up to race a Porsche 992 Turbo S and a Lamborghini Hurucan EVO.

The races begin with a solo pass in the Model X Plaid, in which the vehicle sets the 2.3-second rollout acceleration record, tying with another Model X Plaid video shared earlier this month.

The 2.3-second time includes the rollout, but without it, the time would be considered 2.6 seconds — still an incredibly fast time.

Later in the video, the vehicles perform a few drag races against each other, though the crew apparently only rented to track for about an hour.

The video comes after some customers waited nearly a year for the Model X Plaid to be delivered.

Tesla CEO Elon Musk said earlier this month that the automaker “dropped the ball” regarding the Model X production ramp, which resulted in several delays.

Prior to delivery, Tesla called several Plaid X reservation holders and informed them that they were discontinuing 5 and 7-seat models and replacing them with the 6-seat variant.