Tesla Model Y Being Used For Taxi Service in Iceland 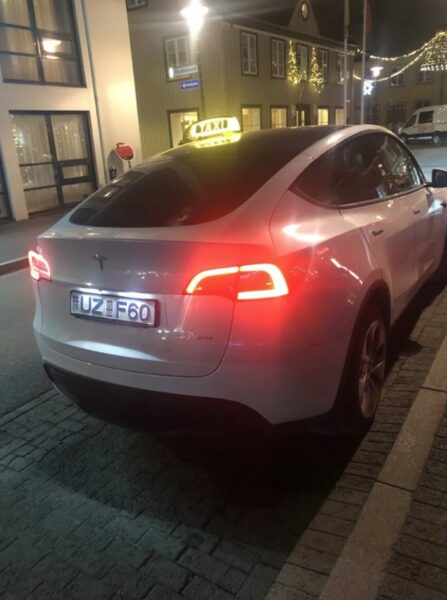 The first Tesla taxi service appears to have surfaced in Iceland, according to a new photo shared this week.

A Tesla Model Y was spotted being used for taxi services for the first time in Iceland on Monday, as shown in a photo of the vehicle (via Reddit).

The Model Y is white and includes a lit “Taxi” sign above the driver’s seat, and is apparently not a common sight in the country – as of yet.

Tesla Taxi Service Pulls Out of Victoria Due to Pandemic https://t.co/Q71LjYlsmP

Last year, Iceland completed a Tesla Supercharger ring around the outskirts of the country’s highways.

In the U.S., a number of companies have begun using Tesla’s vehicles as taxis, including New York City’s Revel, which purchased a massive fleet of Model Y units for use as taxis.

Another New York City-based taxi company also has a small fleet of yellow Model 3 taxis, which even expanded last year.

One Paris, France-based taxi company suspended its EV program following an off-duty accident with one of its Tesla Model 3 units.

Tesla’s latest version of the Full Self-Driving (FSD) beta can detect certain kinds of Autopilot-defeat devices and the company plans to adapt the version according to new methods discovered over time, reports @Teslascope. If detected using such devices, the FSD beta’s software version 10.69.3.1 will force Autopilot disengagement and it will result in strikes against […]
Peter McGuthrie
20 hours ago