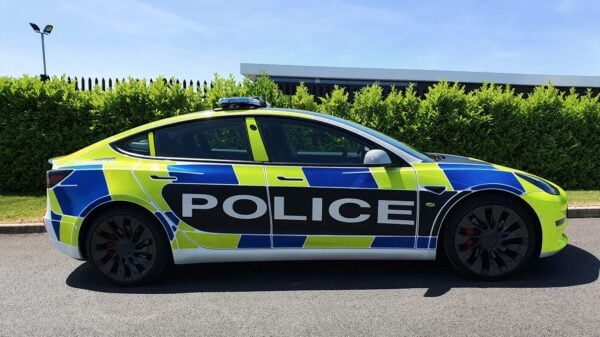 Police departments, emergency services, and even local governments all over the world are starting to lean towards electric cars for new service vehicles, with Tesla’s Model 3 and Model Y proving to be popular choices.

Back in May, the Bargersville Police Department in Indiana, U.S., reported savings of over $6,000 USD in annual fuel and maintenance costs after just one year of using a Tesla Model 3 as a police cruiser.

Similarly, a Tesla Model 3 saved Connecticut’s Westport Police Department about $24,000 in retrofitting for a squad car and managed to make up the bulk of the price differential between it and the department’s go-to gas alternative during its first year on the streets.

But in the United Kingdom, Tesla actually built custom Model 3 police cruisers for police departments to test earlier this year.

Max Toozs-Hobson, Account Manager and Emergency Services lead at Tesla, said in a recent LinkedIn post that the vehicles are “getting some great results” after being in “initial trials with the police” for just nine months.