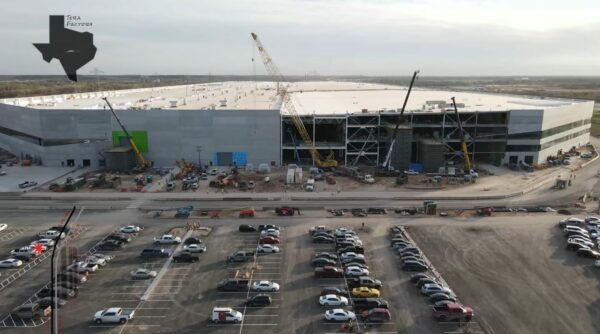 As Tesla’s Gigafactory Texas comes closer to reaching full completion, the company will prepare to build its Model Y and 3 units to start, as well as its highly-anticipated Cybertruck down the road.

A new drone flyover from the Terafactory Texas channel taken on Monday shows that the production facility is nearing completion, specifically including a new drainage system with a few parts of it simply needing to be filled.

The completion of the drainage system includes both East and South Detention Ponds reaching completion, each of which simply needs to be filled with hydro-mulch and a few extra joints buried, as well as a few other finishing touches.

Along with the near completion of the detention ponds and drainage system, we can also see the addition of concrete in a number of areas across the facility.

In addition, the area with Tesla’s GigaPress now features fully-finished concrete, with a few newly-poured sections in the walls and the loading bay, as well as a nearby parking structure that’s now holding a number of pickup trucks.

You can see Randy’s full Terafactory Texas footage below, including the near completion of the drainage system.

Yesterday, Elon Musk was at Giga Texas when he spoke via video call to the Wall Street Journal at the latter’s CEO Council Summit.

With Tesla’s AI Day coming up on Friday, many onlookers are wondering what special announcements and new updates the event could hold. After tweeting the AI Day 2022 poster on Wednesday, Tesla CEO Elon Musk shared a few more details about the event. @ElonMusk retweeted the Tesla AI Day 2022 poster, adding that the event […]
Peter McGuthrie
16 hours ago