The Tesla Model S Plaid launched with an advertised top speed of 200 mph, but Tesla’s online vehicle configurator cautioned that the indicated speed could only be reached with the right wheels and tires.

“The indicated Plaid top speed requires proper wheels and tires which will be available in Fall 2021,” said the configurator.

However, according to a post on Reddit, Tesla changed this caveat on Wednesday. “Top Speed, 200mph, when equipped with paid hardware upgrades,” it now reads. Discussion is rampant on whether this is a ‘bait and switch’ tactic by Tesla for early Model S Plaid adopters. 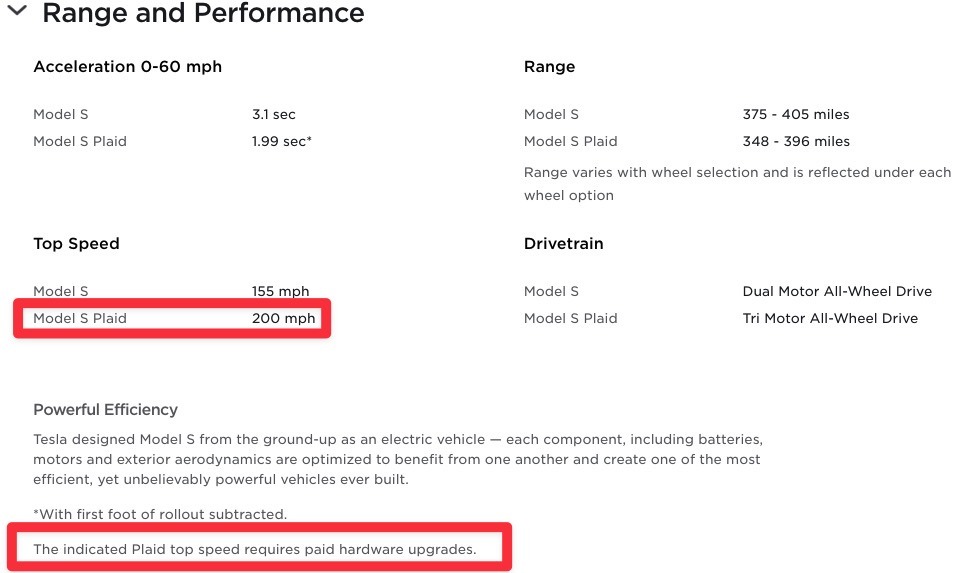 The “proper wheels and tires” Tesla originally talked about were the 21-inch ‘Arachnid’ wheels, which come equipped with Michelin Pilot Sport 4S tires by default.

According to Tesla, this wheel and tire configuration was recently validated at the Model S Plaid’s advertised top speed. However, Plaid owners still won’t be able to hit the all-electric luxury sedan’s 200 mph top speed until Tesla rolls out a software update “in the future” to unlock the speed limiter.

In the meantime, Model S Plaids will be limited to a top speed of 163 mph — nothing to scoff at, especially considering the car is capable of running an 8.994 second 1/4 mile with a top speed of 155 mph.

There’s no word yet on when exactly the software update in question will be released, or what other paid hardware upgrades may be required. Is it a coincidence that Tesla released a new $20,000 USD carbon ceramic brake kit for the Model S Plaid yesterday?