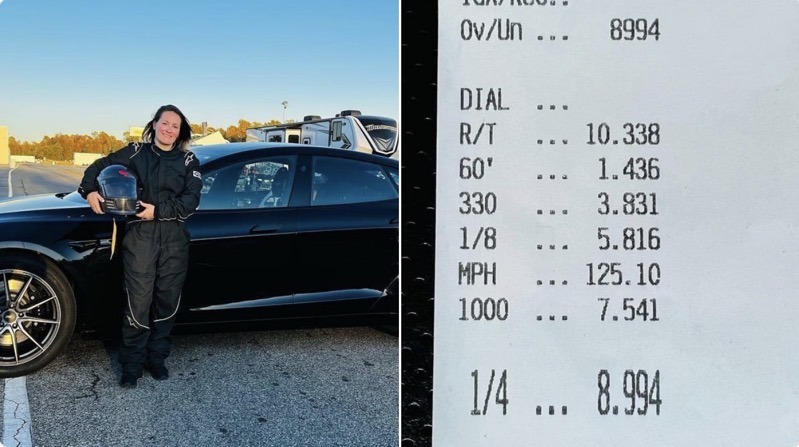 Tesla’s Model S Plaid has reached an 8-second quarter-mile time, according to a video and time slip shared by George Dodworth.

“First Tesla in the WORLD in the 8s! Congrats Christine @gtr_raceher !! We’ve been ready to make the attempt for a few months but between work and weather it was not possible. Elon! Do we have your attention yet?”, said Dodworth on Instagram. Dodworth’s wife Christine drove the Model S Plaid to a the record time at Maryland International Raceway.

A video of the record-setting 1/4 run and drag slip was also shared, showing an 8.994 1/4 mile time with a trap speed of 155mph according to the video.

Tesla’s previous 1/4 mile record time was set at 9.23 by Jay Leno in a Model S Plaid, from earlier this year.

The Model S Plaid driven by Christine above looks modified and is not stock, as seats inside the electric sedan appear to have been removed, allowing for a weight reduction, in the news shared by @tomtharp.

Congratulations to my friend George and his wife Christine! They ran the first 8 second 1/4 mile in their Tesla Plaid Model S! pic.twitter.com/xjTJD6jQra

Well now we’re seeing more reports of the new larger rear screen in the Tesla Model S and Model X for 2023. After seeing pictures of this larger rear screen in Europe and China, we’re now seeing it for the first time in Canada, thanks to Tesla North reader Sam, who just took delivery of […]
Sarah Lee-Jones
10 hours ago

Image via Yan Chang Earlier this week it was reported the 2023 Tesla Model S and Model X was said to include a new larger rear display, as shared by a picture of a Model S in Europe. While it’s easy to assume all pictures on the internet are real, sometimes it’s worth taking things […]
Sarah Lee-Jones
11 hours ago