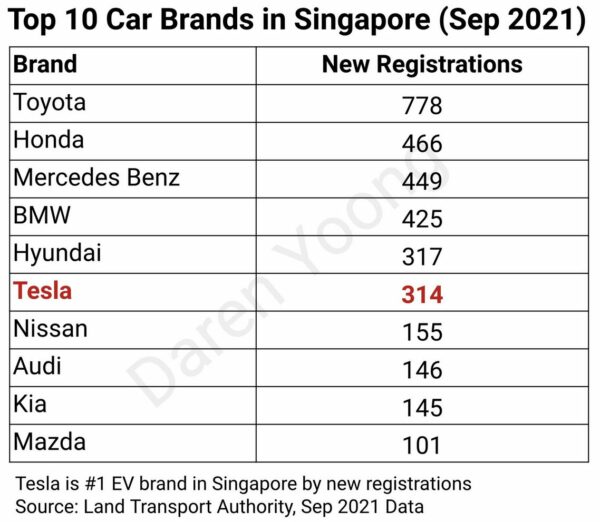 The first Tesla Model 3 deliveries began in Singapore just a few months ago, and the company’s sales are reportedly already outpacing many of the country’s other car brands.

@Daren Yoong shared a screenshot of September’s top 10 car brands in Singapore on Friday, showing Tesla as the sixth most popular car brand in the country, just ahead of Nissan and behind Hyundai, according to data from Singapore’s Land Transport Authority (LTA).

The data shows that Tesla vehicles had 314 registrations in September, while the most popular brand, Toyota, had a total of 778 registrations total.

In addition to Tesla, Hyundai and Nissan, other notable brands on Singapore’s top 10 list in September included, in order from most popular to least popular, Honda, Mercedes-Benz, BMW, Audi, Kia and Mazda.

If we take Tesla’s numbers for Q3 2021 into consideration, Yoong says the automaker would be in the 8th spot, pointing out deliveries only started in the island nation-state at the end of July, and we should see a fuller picture when Q4 is complete. Model Y hasn’t even entered the picture yet, as they are set to deliver in early next year.

🇸🇬 Tesla would be at No. 8 for Q3 2021 in Singapore. Tesla Singapore only started official deliveries in end-Jul 2021, so we'll see a true full quarter comparison in Q4 2021. It's going to be a different picture! These are only Model 3s. Model Y deliveries will start early-2022. pic.twitter.com/y3GOMXh8Dz

While the Tesla Model 3 is currently the only available vehicle from Tesla in Singapore, the company’s Model Y electric SUV is set to see the first deliveries in the country as soon as early 2022. The country also gained the first Tesla V3 Supercharger in Southeast Asia, located in Singapore’s Orchard Central shopping mall.

It’s worth noting that Tesla is not only the sole electric vehicle (EV) company on the list, but also that it outpaced Nissan, which saw 155 registrations, by twice the volume of registrations.

The cost of a Tesla Model 3 Performance in Singapore is equivalent to $130,000 USD, due to the country’s limitations on the number of vehicles on the island, to limit pollution and congestion.

Yoong also recently had the chance to visit Giga Berlin and shared a video of his full tour of the new factory.