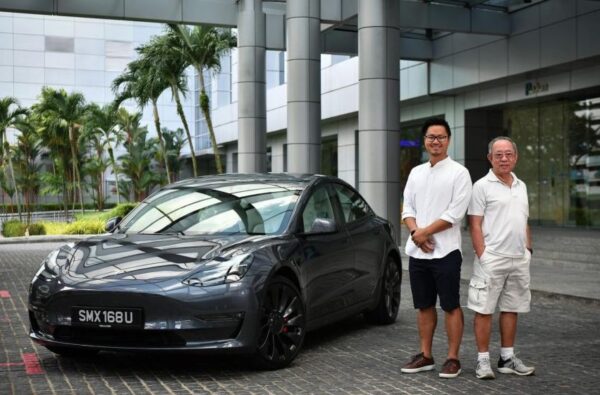 The first Tesla Model 3 deliveries in Singapore have been arriving in the country over the past month or so, and finally, some of the company’s first customers in the island city-state.

Tesla has officially delivered its first Model 3 in Singapore on Thursday morning, to preorder father and son customers Teng Po Yew and father James Teng, according to The Straits Times. The two arrived at an unfinished Tesla showroom in Toa Payoh Lorong 8, formerly a Nissan dealership and took delivery just after 10am local time on Thursday.

Though the deliveries arrived before the completion of Tesla’s Singapore service center, Tesla Country Manager Christopher Bousigues says that deliveries could take an additional two months if the company had waited for the service center to open.

Bousigues said, “We’re putting our customers’ needs ahead of our own. If we’re to start delivering cars only when our showroom is ready, it would be another two months.”

The Teng family, however, placed a preorder for the Model 3 in 2016, and have finally taken delivery five years after the initial order, and only about five months after the automaker officially entered Singapore.

The younger Mr. Teng says that the family elected the Model 3 Performance variant for the increased range of 567 kilometers (352 miles) over just 448 kilometers (278 miles) for the Standard variant.

Tesla has launched a sunshade for the Model S refresh (2021+) in its online shop, priced at $120 USD. “Constructed from lightweight mesh fabric with a collapsible rigid frame, the Model S Glass Roof Sunshade blocks 66 percent of luminous transmittance. Easily removable, the sunshade is installed onto the interior of the glass roof with […]
Sarah Lee-Jones
9 hours ago

Tesla continues to leverage its in-car notification system to alert owners to charge their vehicles, when there’s a chance electrical grids may be impacted by weather conditions. Full Self-Driving (FDS) beta tester, Chuck Cook, shared a message he received in his Tesla on Tuesday. “In the next 48 hours, a storm is forecast to make […]
Sarah Lee-Jones
12 hours ago