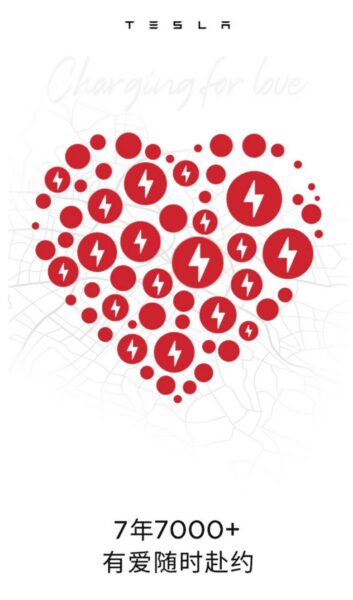 As electric vehicles (EVs) continue to increase in popularity in the world’s largest auto market, Tesla’s personal charging network is continually growing – and it has just passed an important milestone.

Seven years after Tesla’s first Supercharger stall in China was established in Shanghai, the U.S. company has now installed over 7,000 Supercharger stalls across China, according to a post shared by Tesla (via @Ray4Tesla).

In April 2014, the 1st Tesla Supercharger stall in China was commissioned in Shanghai. Now 7 years later, there’re over 7,000 stalls across China. Look forward to the next 7 years. @elonmusk @teslacn pic.twitter.com/gomQVuRdD4

February also happens to be the month Tesla launched production at its Shanghai-based Supercharger factory, which is expected to be able to produce about 10,000 Supercharger stalls per year. At a pace of 200 stalls per month, the company could even be set to outdo its own goal.

Tesla also launched the very first solar-powered Supercharger in China in June, with news earlier this year that Tesla will make 100 percent of Supercharger powered by clean energy in 2021.

Last month, Tesla CEO Elon Musk also confirmed that Tesla will open its Supercharger network to other EVs in 2021, though it’s not yet clear if this will apply to all auto markets right away.

Tesla CEO Elon Musk has spoken out in regards to his agreement to buy Twitter on the original terms, after news broke on Tuesday morning. Musk said just now, “Buying Twitter is an accelerant to creating X, the everything app.” When asked if it would be easier to build X from scratch, Musk replied, “Twitter […]
Sarah Lee-Jones
8 hours ago

Tesla has announced it will be removing ultrasonic sensors from its vehicles, the next step of its camera-based Tesla Vision Autopilot. “Today, we are taking the next step in Tesla Vision by removing ultrasonic sensors (USS) from Model 3 and Model Y. We will continue this rollout with Model 3 and Model Y, globally, over […]
Sarah Lee-Jones
11 hours ago

Tesla announced on Tuesday it has hit a milestone of reaching 10,000 Superchargers in Europe. “Tesla owners in Europe now have access to over 10,000 Superchargers, spread over 30 countries,” said the automaker on LinkedIn. “The European network has already grown more in 2022 than any other year, with still 3 months to go,” said […]
Sarah Lee-Jones
12 hours ago