Tesla Surpasses 760 Superchargers in China with Over 6,000 Stalls 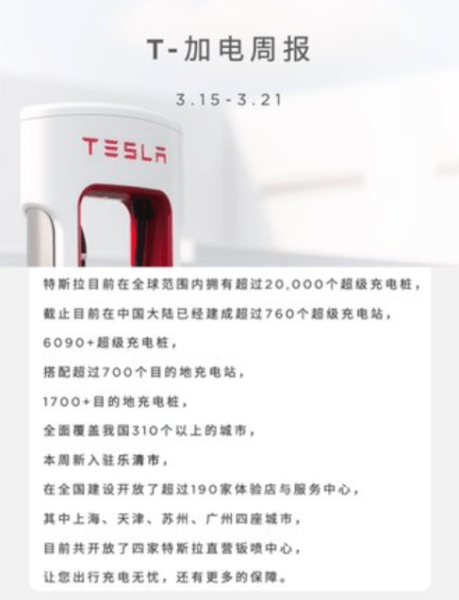 Perhaps the biggest barrier to mainstream adoption of electric vehicles (EVs) is the charging infrastructure currently available in most places. However, Tesla China has been building new Supercharger stations rapidly, with new charging stalls popping up nearly every week.

According to @42how_, five new Tesla Supercharger stations opened last week in mainland China for a total of 45 new charging stalls, based on an email from the company. This number brings the country up to over 760 Supercharger stations, with 6,090 stalls now covering more than 310 cities across China.

In February, Tesla began production at its Shanghai Supercharger factory, where the company expects to produce up to 10,000 new Superchargers every year. Tesla just placed its 700th Supercharger station in early January, with over 60 more coming in the few months since.

Tesla Gigafactory Shanghai began offering tours earlier this month, for the first time ever since the factory’s opening amidst the COVID-19 pandemic.

Last week, Tesla was officially banned in China for use by military personnel, for fears that the vehicles’ cameras were able to spy and report information back to the US government. Tesla CEO Elon Musk was quick to deny the claims, stating that the company didn’t share user data with the Chinese or the US government, and later going on to praise China’s emission-reducing efforts and the country’s market as a whole.

Tesla’s brand retains customers better than other automakers, and it tends to steal customers from other brands, according to new data shared by S&P Global Mobility last week (via @Umbisam). The data measures a 12-month period leading up to July 2022, looking at how drivers purchased — whether switching to a new brand, or remaining loyal […]
Peter McGuthrie
4 hours ago

Tesla is offering a new discount that could slash prices even further for previous brand owners, with a new trade-in deal available for new Model S and X vehicles. U.S. buyers of the Model S and X who trade in an old Tesla vehicle are now eligible to receive $3,000 off the price tag or […]
Peter McGuthrie
5 hours ago

Tesla has made a Twitter account for its Megapack commercial battery packs, showing as @Tesla_Megapack, and in the bio it says “large-scale energy storage,” as first spotted by @SawyerMerritt (via @Tslachan). At the time of writing, the account has yet to make any posts, has about 1,390 followers and only follows three other accounts: SpaceX, […]
Peter McGuthrie
5 hours ago