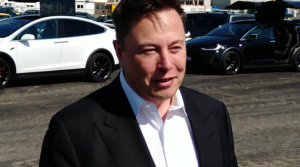 Tesla came under fire from the Chinese government in recent weeks, when the country’s military personnel were officially banned from driving Tesla’s electric vehicles (EVs) due to security concerns.

However, Tesla CEO Elon Musk has since denied the security claims and has even taken his praises for China one step further.

In an interview published Tuesday by state-run channel China Central Television, Musk said he was particularly impressed by China’s carbon emission goals set out in the country’s most-recent five-year economic plan, as well as the social blueprint enacted earlier this month, according to the Wall Street Journal.

During the interview, Musk said, “I’d like to strike an optimistic note and I’m very confident that the future of China is going to be great and that China is headed towards being the biggest economy in the world and a lot of prosperity in the future.” Musk continued, “China in the long term will be our biggest market, both where we make the most number of vehicles and where we have the most number of customers.”

China’s five-year budget plan, as published in Beijing earlier this month, shows the country reducing its emission intensity – or the amount of carbon produced per unit of GDP – by 18% between 2021 and 2025, a target in line with previous trends.

Ultimately, the plan holds that China will become carbon neutral by 2060, a goal not dissimilar from many governments and municipalities around the world.

Below are Musk’s comments to China National TV, as shared by T-Study:

Musk, like Apple’s CEO Tim Cook, appears to have perfected the art of navigating the business waters in China, by treading carefully and ‘kowtowing’ to the nation when necessary. Tesla is the only fully foreign-owned automaker in China and is set to have a big 2021 year when it comes to production and deliveries in the nation, driven by demand for Model 3 and Model Y.