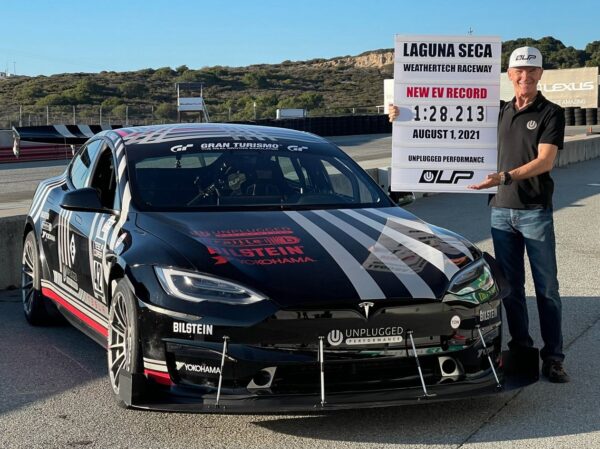 Even as electric vehicles (EVs) are in their infancy, they’re already keeping up with some of the world’s fastest cars, as shown in a new record set at a California raceway over the weekend.

EV racer Randy Pobst set a new EV record with Tesla’s Model S Plaid at the Laguna Seca Raceway’s TeslaCorsa 16 event on Sunday, narrowly missing the mark for the fastest production car record, achieved by a McLaren Senna at the California track, according to @Unplugged Performance.

While the McLaren Senna landed a 1:27:3 at Laguna Seca, Pobst’s decked-out Model S Plaid finished with a 1:28:2 – even beating the former second-fastest production car speed, which achieved a 1:28:3 time in a Porsche 991 GT2 RS.

The real kicker in breaking this record, however, is that all three of these speeds were earned by Randy Pobst himself – with the most recent EV run being perhaps the most impressive at all.

Pobst was no stranger to EVs before this run, though. In fact, Pobst has been racing EVs for nearly half a decade, and most recently he also earned a victory with the Tesla Model S Plaid at the annual Pikes Peak International Hill Climb in Colorado.

Last year, Pobst crashed in a Tesla Model 3 at the Hill Climb, making the recovery and victory in two subsequent races following the incident even more of an accomplishment.

Tesla is offering a new discount that could slash prices even further for previous brand owners, with a new trade-in deal available for new Model S and X vehicles. U.S. buyers of the Model S and X who trade in an old Tesla vehicle are now eligible to receive $3,000 off the price tag or […]
Peter McGuthrie
37 mins ago

Tesla has made a Twitter account for its Megapack commercial battery packs, showing as @Tesla_Megapack, and in the bio it says “large-scale energy storage.” (via @Tslachan). At the time of writing, the account has yet to make any posts, has about 1,390 followers and only follows three other accounts: SpaceX, Elon Musk and Tesla. The […]
Peter McGuthrie
43 mins ago