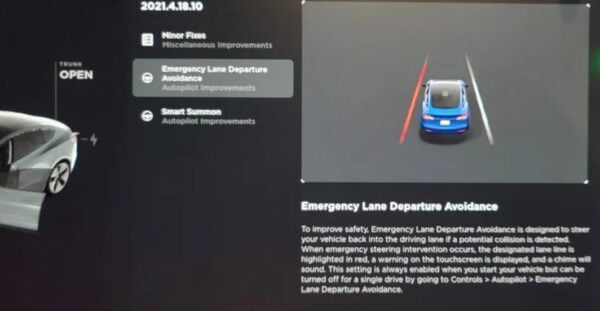 A new software update has begun rolling out for Tesla owners, and the update adds some past functionality.

Tesla’s most recent update, 2021.4.18.10, has restored Lane Departure Avoidance, Smart Summon, and it has increased the Autopilot cap in Pure Vision vehicles from 75 mph to 80 mph on Model 3 and Y units, according to u/goatedboat5.

The update was also confirmed by Tesla CEO Elon Musk, who said that the “production release update was coming this week,” which includes raising the max speed to 80 mph.

Production release update coming this week, which includes raising max speed to 80 mph. Sorry, 75 mph limit was done as precautionary measure. Turned out to be unnecessary.

The 2021.4.18.10 also added the ability to turn off high beams while in Autopilot, a feature that was required when Tesla began switching to Tesla Vision from radar.

Tesla started producing vehicles without radar-based vision in May, with all new vehicles now including camera-based sensors instead. Musk has famously criticized radar in the past, stating that it isn’t as effective or powerful for autonomous driving purposes as camera-based Tesla Vision has the potential to be.

Since Tesla Vision has started rolling out, a number of Tesla owners have tested the camera-sensing abilities on closed-off roads, most finding that the Tesla Vision is still in its infancy – meaning it hopefully will increase in quality as more drivers use it and allow the system to collect data from real-time road situations.