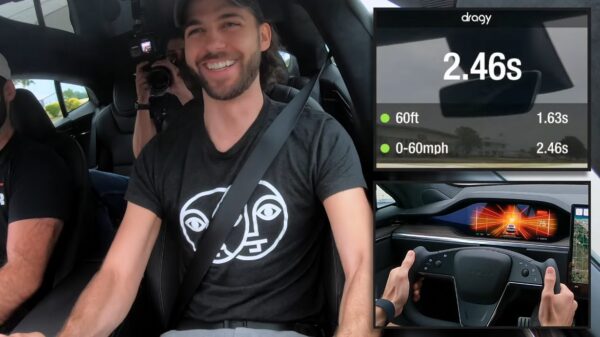 The Tesla Model S Plaid has been out for under a month, and it’s already making impressive waves across the internet with its insane speeds and its “going to Plaid” 0 to 60 mph launches.

A new video shared Sunday by Tesla Daily shows Rob Maurer checking out the Tesla Model S Plaid, including a first drive, a segment of the team “going Plaid,” a talk about the steering yoke itself, and a discussion on other cool features and benefits of the luxury electric sedan.

Maurer says the Model S Plaid yoke is the way to go, and he encourages prospective buyers who are considering the normal wheel to just go with the yoke – since the normal steering wheel models still did away with the shifting stalk.

Tesla’s Model S Plaid won the Pikes Peak International Hill Climb over the weekend, depicting once again the sheer speed of the electric vehicle (EV). The Model S Plaid, while highly modified for the race, was driven by experienced racecar driver Randy Pobst with the full extent of the vehicle’s capabilities.

The Tesla Model S Plaid is also now officially listed on Wikipedia as the quickest 0 to 60 mph vehicle on the market, clocking insanely-fast independent test times of under 2 seconds.