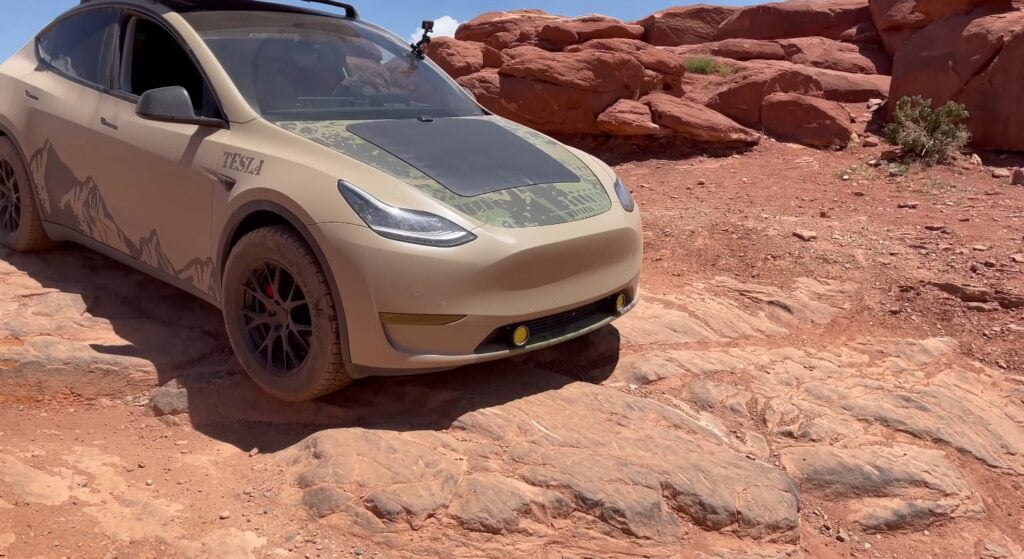 Tesla enthusiast i1Tesla has published some additional footage of their modified Tesla Model Y off-roading in the red rock formations of Moab, Utah.

i1Tesla had previously released a video of their Model Y off-road climbing in the same area, and both videos showcase the all-electric SUV feeling right at home on unpaved roads and the rocky terrain.

We also get to see Tesla’s Off-Road Assist feature in action, which is designed to increase traction on rough surfaces and also balance torque between the front and rear motors.

This is the same Model Y the Youtuber modified for off-road adventures last year, and they even documented the whole process to help others with overlanding aspirations.

The modifications made to this specific Model Y include, but are not limited to, an off-road capable suspension, aftermarket tires, and a steel plate on the underside of the chassis to protect the EV’s battery.

Looking at how effortlessly the Model Y traverses through the uneven, rocky terrain and at one point even drives over a series of rocks, one could be forgiven for forgetting that the Model Y is a consumer SUV and not an off-road or all-terrain vehicle like Tesla’s upcoming Cybertruck.

Plugin vehicle shares in the UK reached 22.4 percent, up from 21.6 percent year over year, according to CleanTechnica. The figure is made up of battery-electric vehicles (BEVs) at 16.9 percent and plugin hybrid electric vehicles (PHEVs) at 5.5 percent of the overall market share. A year ago, these figures landed at 15.2 percent and […]
Peter McGuthrie
24 mins ago

Since entering the Australian market in August, the Tesla Model Y has been making waves, with many customers flocking toward the electric SUV in recent months. Tesla delivered 4,359 Model Y units in Australia in September, as reported by The Driven. The figure nearly doubles the next top-selling EV in the country, showing a dominant […]
Peter McGuthrie
38 mins ago