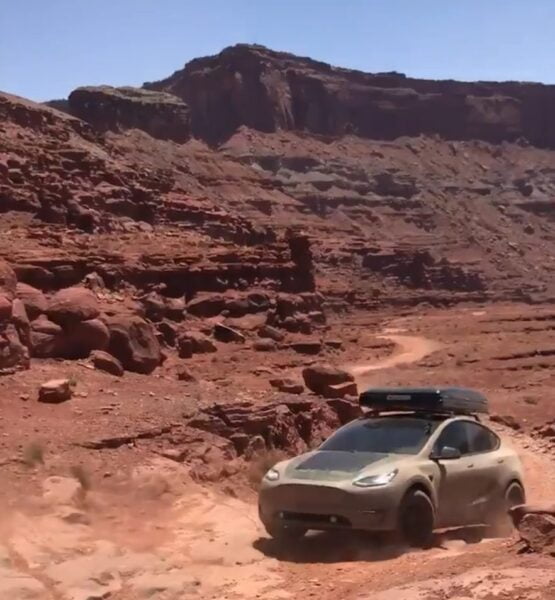 Last year, i1Tesla shared videos on how to make an off-road Tesla Model Y, and in a newly-shared clip, we can see the same Model Y doing work in Moab, Utah.

In a new video from i1Tesla, we see Tesla’s off-road assist helping the Tesla Model Y navigate a bumpy uphill climb in the same Model Y seen before. The Model Y in question includes a 4-inch lift, totaling about 9 inches of clearance, as well as A/T III Toyo tires in 255/55/19 dimensions.

Check out what @elonmusk @Tesla’s off-road assist can do in the #ModelY. #TeslasGoneWild. Please retweet, Elon needs to see this! pic.twitter.com/yRGrgT6WpP

The Model Y also includes a matte combat green color, that definitely suits an offroad vehicle in the red rocks of Moab. Many users on the thread joked that the footage was taken on Mars, thanks to Tesla and SpaceX head Elon Musk.

Last year, Tesla’s Model Y was also put to the test going off-road, debuting the vehicle’s off-road mode which both balances the Model Y’s torque, while allowing each wheel to spin freely when necessary.

GMC’s electric Hummer was also seen traversing Moab hills in recent weeks and is expected to be a major rival to the Tesla Cybertruck, which is estimated to start production by the end of 2021.

Tesla’s Model 3, Y and S units make up a market share of 26.33 percent of the electric vehicles (EVs) in Denmark, according to data shared by the Danish car imports trade association De Danske Bilimportører (via @Tesla Club Danmark). Out of a total of 105,379 EVs on Denmark’s roads, the data shows that Tesla’s […]
Peter McGuthrie
2 hours ago

As electric vehicles (EVs) continue to gain steam across worldwide markets, one European country known for early adoption of zero-tailpipe-emission vehicles has just reached a new record for single-day deliveries from Tesla. Tesla set a new daily record with 297 vehicles delivered to Norway in one day, as pointed out on Tuesday by @Mathias Føns. […]
Peter McGuthrie
3 hours ago

Tesla Model Y buyers in Australia could bring the SUV’s price down by as much as $10,000, making it as affordable as the Mazda 3 with a new tax deal, according to The Driven. To achieve this level of savings, buyers must qualify for a combination of incentives including the country’s new fringe benefit tax […]
Peter McGuthrie
2 days ago