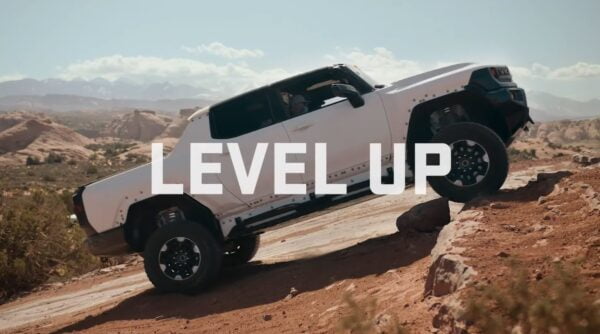 In a new teaser video posted on YouTube Wednesday by GMC Hummer EV, we see the electric Hummer performing some impressive road testing around Moab, Utah’s iconic hills. The video shows the “Supertruck,” as dubbed by GMC, climbing steep hills and clearing trenches, just as one might expect a Supertruck to perform in such a landscape.

The video shows the EV Hummer’s adaptive air suspension, extract and terrain modes, as well as e4WD and torque distribution, among other features.

GMC’s electric pickup truck is expected to rival the futuristic-looking Tesla Cybertruck, which is rumoured to start production at Gigafactory Texas as early as June, with deliveries going out by the end of 2021.

If the GMC Hummer EV is something a G.I. Joe would drop their granddaughter off for soccer in, according to Lyn Woodward of Kelley Blue Book, then the Tesla Cybertruck is something a U.S. Space Force agent might drop their robot off for school on Mars in, or something like that.

Similarly to GMC, Tesla has been testing its Cybertruck behind closed doors, and allegedly against this Dodge RAM TRX on the EV company’s Fremont production facility track.

You can watch GMC’s full teaser video featuring the Hummer EV taking on some of Moab, Utah’s biggest hills here.