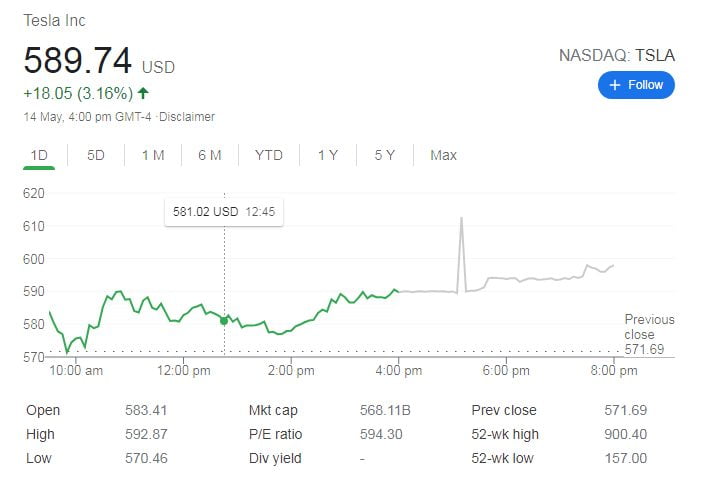 Tesla shares gained 1% on Friday after Morgan Stanley justified the beating the electric vehicle (EV) manufacturer’s stock has recently taken, and deemed its current price a ‘buying opportunity’. Shares of Tesla closed up 3.16% at $589.74 USD on Friday.

Morgan Stanley analyst Adam Jonas stressed upon his $900 USD price target for Tesla shares, a high previously achieved back in January. Other financial institutions and analysts have also formulated similar price targets for the EV pioneer.

Tesla stock currently sits at a little less than one-third of that Jonas’s price target, which he believes is an opportunity that should be grabbed.

The decrease in Tesla’s share price has been fueled by a mix of increasing competition both stateside and abroad, a recent dip in sales in the Chinese market, Gigafactory Shanghai’s planned expansion reportedly being put on hold, and delayed product launches.

Jonas believes the reports of Tesla’s troubles are exaggerated and rife with hyperbole. Tesla itself said earlier this week that reports of the land acquisition for Giga Shanghai’s planned expansion being paused were unfounded, and that the project is “developing as planned“.

Tesla has already been exporting vehicles produced at Gigafactory Shanghai to Europe, and the company was previously reported to be considering an expansion of exports to Asia and even the United States.

As Tesla continues with plans to open its Superchargers to non-Tesla vehicles, the automaker plans to shift its charging rates and times at certain locations. Tesla is updating its charging rates at select Supercharger locations starting on Wednesday, September 28, according to tweet spotted by @Whole Mars Blog. In the screenshot, Tesla says that users […]
Peter McGuthrie
19 hours ago