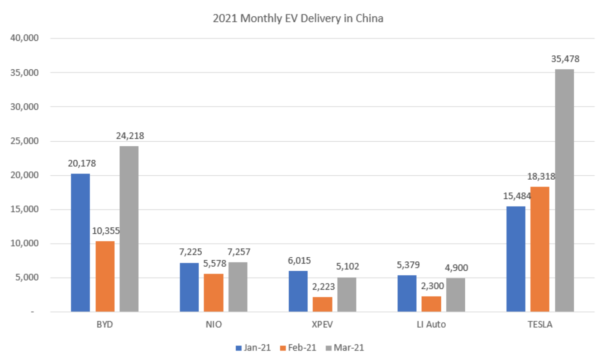 Tesla China delivered 35,478 vehicles in March 2021, a whopping 93.69% increase over its 18,318 deliveries in February, according to numbers from the China Passenger Car Association (CPCA) (via @ray4tesla).

The news comes on the heels of a major, worldwide semiconductor chip shortage, which affected production for most electric vehicle (EV) companies around the world, including China’s EV startup NIO.

While the Wuling HongGuang Mini EV topped the list with 41,491 units delivered, as it has in recent months with its super low price, Warren Buffett-backed company BYD took third behind Tesla, delivering a total of 23,906 EV and gas units.

BREAKING: @Teslacn sold 35,478 units (3/Y) in the month of March according to CPCA. Compared to 18,318 units sold in February, that’s a whopping 93.69% MoM sequential growth. Who said Tesla sales has peaked and is experiencing chip shortage in China? Congrats @elonmusk @teslacn. pic.twitter.com/nxrvSFJITO

Other EV companies like Xpeng Motors and NIO saw impressive first-quarter sales numbers, and while they broke records of their own, the companies were no match for Tesla’s total sales, especially going into March.

Tesla’s worldwide deliveries in the first quarter even beat out Wall Street estimates, with the company’s stock gaining new price target from Wedbush, and increasing substantially following reports of its impressive deliveries number.

Wedbush Securities analyst Daniel Ives reacted to Tesla’s China numbers in March by saying, “as this green tidal wave hits its next phase globally, … the Tesla EV demand story is just starting to play out,” speaking to The Street. The analyst predicts a run rate of 300,000 cars delivered in China for 2021, and for Tesla to hit its goal of 850,000 vehicles delivered globally.

While Tesla’s cars recently came under fire in China and were banned for military personnel due to privacy concerns with the cars’ cameras, the company has since come out praising China, and stating that its cameras are not activated outside of the US.

The U.S. Securities and Exchange Commission (SEC) has launched a probe into Elon Musk for his role in directing the branding around Tesla’s self-driving car ambitions — reports Bloomberg. According to the publication, the efforts are part of the regulator’s ongoing investigation into Tesla’s claims surrounding its Autopilot and Full Self-Driving (FSD) features. SEC officials […]
Nehal Malik
7 hours ago