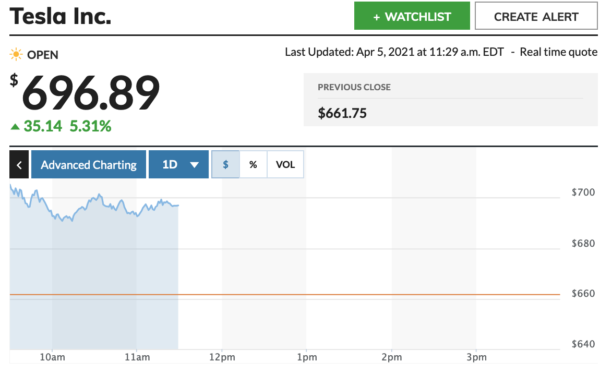 Wedbush Securities has been known to take a rather bullish approach to Tesla (TSLA) and its stocks, and a recent update has upgraded the company immediately following better-than-expected Q1 deliveries.

On Sunday, Wedbush raised Tesla’s (TSLA) price target to $1,000 from $950, with a bull-case price of $1,300 per share, according to Market Watch. While the company’s shares closed at $661.75 on Thursday (since the market was closed Friday), Monday’s premarket saw Tesla’s shares rise almost 8%.

Along with the change, Wedbush analyst Daniel Ives upgrade his rating from hold to outperform. In a note, Ives said, “In our opinion, the 1Q delivery numbers released on Friday was a paradigm changer.”

In the next three to four years, Ives and the team at Wedbush see Tesla’s profitability increasing significantly, especially as the company continues to refine its Full Self-Driving (FSD), as well as its other ambitious plans.

China’s new-energy vehicle (NEV) sales dropped in the last week of November, as was measured by insurance registrations. BYD with its hybrid electric vehicles doubled Tesla’s sales to top NEV leaderboards in China during the fourth week of November, with BYD overseeing 38,480 insurance registrations while Tesla had 16,121, according to a report from CnEVPost. […]
Peter McGuthrie
21 hours ago

After Tesla stepping up its hiring efforts in Thailand earlier this year caused some to expect an upcoming launch in the country, the automaker has officially announced plans to start selling cars there. In a post on LinkedIn, Tesla shared a photo with text in Thai translating to “Hello Thailand,” and saying “See you December […]
Peter McGuthrie
23 hours ago