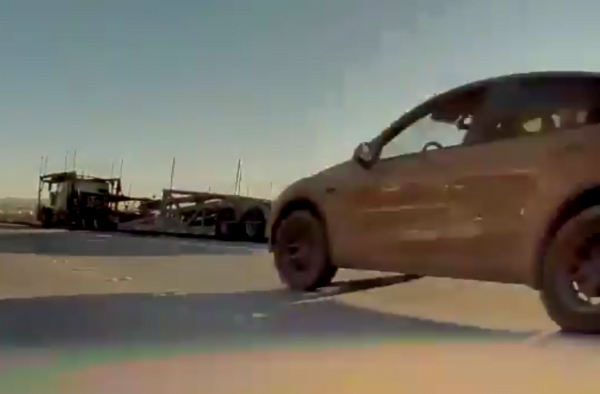 Just a few days after Tesla Fremont filed for expansion to develop a permanent Model Y assembly space, a strange Model Y variant has been spotting driving around the California factory.

Tuesday, the well-known Tesla enthusiasts known as The Kilowatts shared photos on their Twitter account depicting some sort of lifted Model Y at Tesla’s Fremont factory. The variant also had enlarged wheels, with many users suspecting this may be an adaptive air suspension kit, as was teased in the Tesla owner’s manual last month.

WHAT ARE THOSE!? 😲
We found this dirty prototype Model Y driving around Tesla’s Fremont Factory today with an apparent lift kit and some very unique wheels! #Tesla #ModelY pic.twitter.com/mpdkKNjscd

Also included in the video is a pristine white Model S trailing behind the Model Y, with what look to be special Plaid Plus wheels.

The Kilowatts managed to capture the Model Y prototype with the dash cam on their Tesla, so we can see a few different angles. Another important detail in these videos is that this Model Y is looking pretty dirty. So maybe this could mean some lifted, off-road time for this new prototype?

Either way, an air suspension update seems highly likely, especially given that the feature is already included in the Tesla owner’s manual. It was also confirmed by Elon Musk late last year, along with voice command capabilities for controlling ride height.

A couple of extra inches off the ground won’t hurt any Tesla Model Y owner, so hopefully, air suspension is indeed on its way?

Tesla has increased delivery wait times for all models except the entry-level Model Y in China to 4-8 weeks — reports CnEVPost. The move is in stark contrast with delivery timeline changes made by Tesla in recent weeks, which cut wait times down significantly. For some models, Tesla managed to bring delivery times down to […]
Nehal Malik
11 hours ago

If you’re planning to finance your next Tesla purchase in the United States, rates have increased to kick off the fourth quarter. As noted by Waiting4Tesla.com (@w4tsla), financing rates for Model S/X and Model 3/Y on the Tesla website in the U.S. have increased 0.25%, now showing as 4.74% (previously 4.49%). Tesla partners with major […]
Sarah Lee-Jones
15 hours ago

Tesla on Friday held its annual AI Day event to showcase the company’s latest leaps in Artificial Intelligence, automation, and computation. The event kicked off with Tesla showing off the first working prototype of ‘Optimus,’ the long-awaited Tesla Bot. Despite merely being a prototype, Optimus was able to walk out on stage, wave to the […]
Nehal Malik
16 hours ago