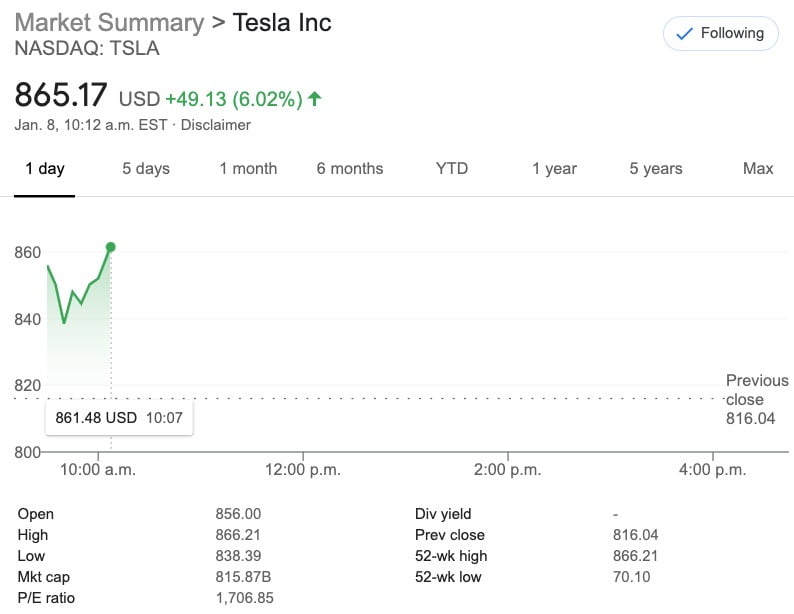 Tesla’s recent rally isn’t stopping anytime soon, it appears and is starting to sound like deja vu. The automaker’s shares on Friday morning surged to a new all-time high of $866.21 per share and currently is up 6%.

For the first time, Tesla’s market cap surpassed $800 billion, currently at $815 billion and also blowing by Facebook, which has a market cap at $755 billion as of writing.

Tesla is now the fifth-most valuable company in the U.S., while trading volume on Thursday exceeded Apple, Alibaba and Amazon combined.

Yesterday, Tesla CEO Elon Musk became the richest person in the world, surpassing Amazon’s Jeff Bezos, with a net worth of $195 billion.

Tesla is seeing heavy demand for its Model Y, which launched in China on New Year’s day and is already sold out for Q1.

On Thursday evening, Tesla launched a cheaper version of its SUV in Canada and the United States, offering a rear-wheel drive option for the first time, along with debuting its 7-seat option. The RWD Model Y starts at $41,990 USD.

There does not appear to be a formidable rival to Tesla anytime soon, as a recent report pegged Apple’s electric car plans are still at least half a decade away.