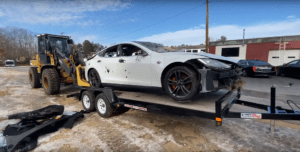 After helping Massachusetts pass a historic right-to-repair law, Rich Rebuilds is back at work tinkering with Teslas. And with new diagnostic tools and resources straight from Tesla, Rich has just released an exciting new build – a much larger project than the ATV we recently reported on, and one that’s sure to have gas car junkies swooning.

In a new video posted Sunday, Rich shares his newest ongoing build, a Tesla Model S with a swapped V8 engine. While it isn’t the typical Tesla build, Rich also shares that he was into gas-powered cars well before he was re-building Teslas, citing this as his reason for putting together this strange Frankenstein vehicle.

While Rich doesn’t complete the swap in this video, we see how he sources his parts in a very detailed way. After being scammed out of an engine, Rich is able to re-order the engine from a vehicle-based eBay site, while picking up the destroyed body of a Model S from a local junkyard. He’ll apparently use the Model S for spare parts while dropping the V8 engine in.

In any case, as Rich states in the video, much of the work that is done on this Model S is essentially recycling hardware that would otherwise end up sitting in a landfill – perhaps with the exception of the purchased engine. In this way, Rich sees his work as responsible as well as fun, as he works to reuse parts and keep the environmental goal of EVs alive every step of the process.

Elon Musk Tweets Heartfelt ‘Thanks’ to Those Who Made Tesla Successful