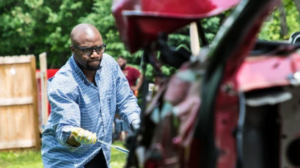 Last Tuesday, a measure in Massachusetts passed in a landslide win, forcing automakers to ensure the same diagnostic tools are available to third-party repair shops, as reported by VICE.

The “right-to-repair” measure also includes Tesla, which has been particularly quiet about its servicing measures and tools, making it difficult for other mechanics to work on its cars.

One mechanic and YouTube host, Rich Benoit rebuilds broken Teslas, and has mentioned difficulty getting access to the right parts and software in times past, due to Tesla’s secretive nature.

The right to repair Bill has passed in Massachusetts with a 75% landslide victory! Thank you everyone that went out and voted! This means that third party repair shops like the electrified garage will now have the same tools needed to diagnose and repair vehicles. Huge win! pic.twitter.com/mGVD18vdm6

Benoit told VICE’s Motherboard, “For us, that means that starting the model year 2022, manufacturers have to give the same tools that they use at the dealerships available to a lot of third parties.”

In spite of the good news, Benoit doesn’t seem optimistic about Tesla letting go of its tools easily. In 2012, a similar law was passed, but Tesla was foregone in a national automaker memorandum which effectively nationalized the law. They also claimed “they don’t have dealers,” in order to avoid the legislation.

In spite of Tesla’s secrecy in sharing diagnostic tools for servicing cars and quality control practices, recent stories have also reported major service and design flaws, like one person’s Model Y roof falling off in the middle of the freeway.

Fortunately, the new law opens up major opportunities for mechanics like Benoit, who have previously been kept out of the world of Tesla service and maintenance. The fight to gain access to Tesla tools and repair documentation sounds similar to how people want Apple to allow for right-to-repair for its products as well.

More electric vehicles (EVs) are set to be sold in China this year than throughout the rest of the world combined, according to an exposé from The New York Times on Monday. As many countries struggle to incentivize EV sales using tax credits and subsidies, China’s customer base has already begun to pivot toward the […]
Peter McGuthrie
6 hours ago

A coming software update has added a useful pop-up feature for Tesla’s Superchargers, showing new details that weren’t previously included. Tesla software update 2022.36 includes a newly designed pop-up map feature for Supercharger locations, as detailed by Not a Tesla App on Monday. The pop-up map includes information such as the number of available charging […]
Peter McGuthrie
7 hours ago

Tesla’s official CCS Combo 1 adapters have begun delivering to customers, as noted on Monday by a Model 3 owner (via Reddit). The CCS adapter costs $250 in the U.S. and $325 in Canada, offering up to 250 kW at third-party charging stations where Tesla’s proprietary Supercharger connections aren’t available. Tesla launched official sales of […]
Peter McGuthrie
7 hours ago