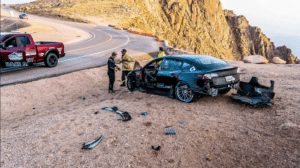 We’ve reported our fair share of Tesla accidents, but those happening to a race car driver are far and few between. However, a recent story has surfaced by one of the most consistent Tesla racers we know, and it’s details are telling.

On Wednesday, Tesla driver Randy Pobst wrote about his experience crashing in a Tesla Model 3 Performance at over 113 mph and 13,000 feet at the Pikes Peak International Hill Climb, released by Motor Trend.

The essay is a thorough documentation of Pobst’s crash, including how he and the team at Unplugged Performance have “risen from the ashes” with a new, race-ready Model 3 since the accident.

In the article, Pobst writes, “I slam the Tesla into the vintage rock wall separating the road from a thousand-foot drop-off (hence, Bottomless). The Model 3 flies into the air and lands unceremoniously in the drainage ditch beyond.” He continues, “I have wrecked this beautiful new creation.”

Despite the accident, Pobst has been racing Teslas for several years, with a number of victories to show forth. He also recovered nicely following the Pikes Peak race, with a second-place at half power in a fully rebuilt UP Tesla Model 3 Performance. In addition, he and the Unplugged team plan to come back to the Pikes Peak race “better than ever” next year.

Tesla delivered 2,177 Model 3 vehicles in Canada last month, out of 6,956 battery electric and plug-in hybrid vehicles in the country for August 2022. According to Transport Canada data, Automotive News Canada reports Tesla was the biggest volume brand under the federal EV rebate program, which offers $5,000 CAD for eligible vehicles. The iZEV […]
Sarah Lee-Jones
3 days ago