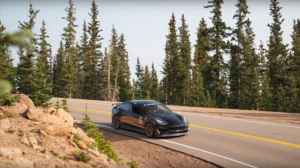 There’s no denying that Tesla produces fast cars in the modern age, and there are plenty of examples to show that.

According to the video, the Unplugged Performance crew also pitted the Tesla Model 3 against a McClaren F1, since the car was apparently one of Tesla CEO Elon Musk’s favorites, and won.

While the video has no driving footage, the three go through the inside of the Tesla Model 3, where Ben shows the workarounds they had to create to trick the car into running. Randy also talked about running oxygen inside the car, since the Pikes Peak Hill Climb takes place at elevations up to 14,000 feet where oxygen is not as dense.

On the role of EVs in racing and in the mainstream, Ben says, “I think it’s going to keep on growing. Our mission for the last seven years was to do exactly this – we want to have electric cars competing against gasoline-powered cars in any category.”

The Tesla lineup certainly shows what EVs can do, and hopefully we’ll only continue to see the trend grow as the future points its sails towards sustainable transportation.