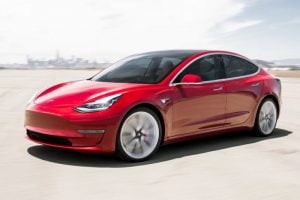 Tesla’s 2021 Model 3 comes with a number of exciting updates and is set for delivery around the world over the next few months.

Australia’s first refreshed 2021 Model 3 has arrived, according to The Driven, and with many more on the way, those with Tesla reservations are likely getting excited right about now. This unit was delivered to Daniel Donner, a resident of Brisbane who reserved a Long Range variant of the Model 3.

Donner said, ”It’s my first EV, and it’s different, better.” He continued, “Love the whole concept of of how Tesla approaches it. All seems to work fine, and no sign of any quality issues.”

Tesla Working with Neoen on Australia’s Biggest Battery Yet https://t.co/QrMLpBHFK0

Along with Donner’s copy of the Model 3, shipping tracker VedaPrime estimates another 800 Tesla vehicles which have yet to complete the compliance processes at Australian ports. We also reported delays in the delivery process of Tesla’s exports to Australia earlier in the fall, many customers of which received refunded amounts for their vehicles.

Australia only approved the 2021 Tesla Model 3 with federal compliance permits on Friday, shortly thereafter being added to the country’s Green Vehicle Guide.

If Tesla can deliver its roughly 800 remaining vehicles to Australian owners before the end of 2020, the company will be able to count them on its year end numbers reports. Until then, they’re keeping their fingers crossed that everything goes smoothly in Australia.

Tesla CEO Elon Musk has spoken out in regards to his agreement to buy Twitter on the original terms, after news broke on Tuesday morning. Musk said just now, “Buying Twitter is an accelerant to creating X, the everything app.” When asked if it would be easier to build X from scratch, Musk replied, “Twitter […]
Sarah Lee-Jones
15 hours ago

Tesla announced on Tuesday it has hit a milestone of reaching 10,000 Superchargers in Europe. “Tesla owners in Europe now have access to over 10,000 Superchargers, spread over 30 countries,” said the automaker on LinkedIn. “The European network has already grown more in 2022 than any other year, with still 3 months to go,” said […]
Sarah Lee-Jones
19 hours ago