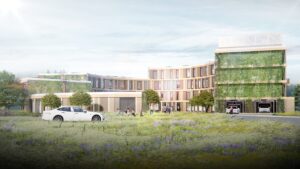 A currently under-development luxury housing project by the name of EVE Park in London, Ontario will also include parking towers fully equipped with a number of Tesla electric vehicles and EV chargers (via Reddit) in the Canadian province.

The developers behind the project want to provide residents with a parking structure for their vehicles, but also furnish it with a number of Teslas of their own. These vehicles will be made available to residents for private leasing and car-sharing with other members of the EVE Park community.

We’ve seen Teslas make their way everywhere from the police to the taxicab industry, but a condo development offering up Teslas for their residents to drive and commute in is certainly a first.

In a post published on EVE Park’s official blog, the condo development stressed how big of a priority decreasing their carbon footprint is to them, and these Tesla-equipped parking towers are a step in that very direction.

We’ve already seen what a Tesla rideshare service is like, and it looks like we’ll soon find out whether a Tesla car-sharing service in a housing project is a good idea.