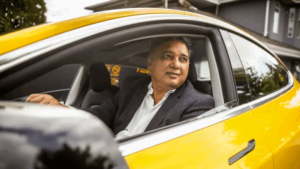 According to a report by CBC News, cabbie Shaminder Rattan will soon be taking to the streets in what he believes to be Vancouver’s first Tesla taxi, in the province of British Columbia in Canada.

Anyone booking a ride in Shaminder Rattan’s cab won’t hear him coming.
That’s because the 62-year-old Yellow Cab driver has bought a Tesla, a move he says makes him the first in Vancouver to offer rides in a zero-emission luxury sedan. https://t.co/fdccUsTZYu pic.twitter.com/Bj3OQeRKAG

Shaminder, 62, has been a cabbie for 34 years, 32 of which he’s spent as a licensed owner of a Yellow Cab in Vancouver, British Columbia. After sharing his taxi licence and car with another individual for the longest time, the veteran cabbie only recently acquired full control of his taxi and licence. It was at this point that Shaminder decided to make local taxi history by purchasing a fully electric Tesla Model 3 and driving it as a Yellow Cab.

The move made sense to him on a number of fronts. The Model 3 is hailed for how safe it is, and its almost silent drive makes it a treat for fares. In addition, its zero-emission electric motor makes it a friend to both the environment and Rattan’s conscience.

With $500-600 CAD ($373-448 USD) in savings on fuel monthly, annual savings on vehicle maintenance, and how travelling in a zero-emission vehicle appeals to potential fares, they all played into Rattan’s decision to invest $52,000 CAD plus taxes in the Model 3, and an additional $2,500 in turning the brand new car into an inviting Yellow Cab.

Considering how well the Model 3 retains value, it is definitely a good investment. With a driving range of 400 kilometres, Rattan believes he’ll be able to easily drive fares around for 12-hour shifts without needing an extra charge.

Whether Rattan is the proud owner of Vancouver’s very first Tesla taxi may be debatable, but what is certain is that, all things considered, this is an excellent move for the seasoned Yellow Cab driver.