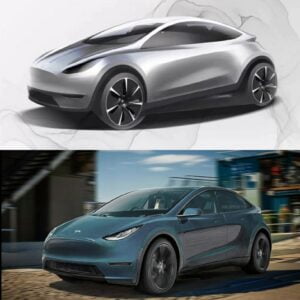 Those following Tesla have long speculated about a smaller design for the European market.

A new post on Reddit’s Tesla Motors subreddit (r/teslamotors) by user u/particledecelerator depicts an artist rendering of the concept design for a new car released by Tesla. And by the looks of it, it would seem to fit right in as Tesla’s new, smaller European hatchback.

The artist rendering is a more realistic version of the concept sketch, with an artificial driving scene and a green-blue finish. The original concept sketch was released by Tesla earlier this year.

Users on Reddit expressed opinions all across the board about the design sketch, some in favor and some not.

On the significance of certain specifications of the car, one user commented, “I think one of the biggest things will be overall width.” They continued, “That’ll save on aerodynamics and make it more attractive to the compact urban spaces they’re making it for. Do the Model 3 / Y have 3-5″ to spare?”

Elon Musk said at its Battery Day event it plans to eventually launch a $25,000 vehicle in three years, while it also plans to launch new original vehicles at its Berlin and Shanghai factories. What would the name be for a smaller Tesla? The Model 2?

One thing is for certain: With Giga Berlin well on its way, and Giga Shanghai already completed, Tesla is getting closer to being able to announce its new designs, of which there will likely be a few following the 2021 release of the Cybertruck.

Tesla kicked off its 2022 AI Day by showing off a demo of its Optimus robot. The Optimum bot was able to walk out on stage on its own, wave to the crowd and even ‘raise the roof’ to music. Optimus was shown lifting boxes, working in a factory doing some light work and even […]
Sarah Lee-Jones
11 hours ago

Tesla’s big AI Day 2022 is here and it is slated to start at 6:15pm PDT/9:15pm EDT from Palo Alto, California. The event is to recruit engineers to “build the future of AI”. According to the AI Day invite, attendees will “learn about Tesla’s latest developments in artificial intelligence, including Full Self-Driving, Tesla Bot, Dojo […]
Sarah Lee-Jones
20 hours ago

A set of photos shared this week show that Tesla’s Powerwall and Solar Roof are super durable and will continue working after exposure to storms, as noted by one roofing company. @Tesla retweeted photos of a Tesla Solar Roof and Powerwall that withstood winds and rain from Hurricane Ian on Thursday. The photos, originally shared […]
Peter McGuthrie
21 hours ago