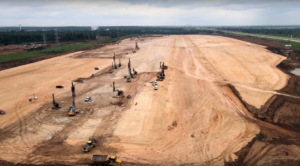 Tesla has put its Gigafactories together at impressive speeds in the past, and with its Berlin and Austin Gigafactories on the way, these are expected to be no different.

In a video released Monday, Tesla-coverage YouTube host Jeff Roberts, shows a progress update from the new Gigafactory in Austin. The construction update comes in the form of a 4K drone flyover, and it does a thorough sweep of the entire construction site.

While the site is largely dirt, bulldozers, and other industrial vehicles at this point, we did recently catch wind of Tesla’s permit application with city of Austin for the construction site.

Impressively, the video used an iPhone 11 Pro Max combined with a DJI Mavic Air 2 Drone, and the results are beautiful. Watching in 4K will make any viewer feel like they’re hovering above the construction site.

Giga Texas will be home to Tesla’s upcoming Cybertruck, which will start being delivered upon the site’s completion. The Cybertruck will likely not be the only EV produced at the Austin, Texas plant, though it’s not clear what all operations at the site will be yet.

Tesla’s Texas Gigafactory is planning to begin delivering vehicles by May 2021, and as of right now, it’s easily on track to do so.