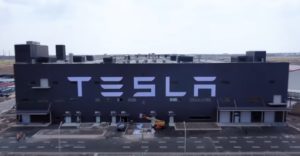 There have been some recent changes to Tesla’s operations both in North America and around the world. Many of these changes are owed to the outbreak of the coronavirus. Earlier in the year, Tesla experienced an interruption in their supply chain in China. The snafu led to some frustrated customers. In the United States, Tesla had to cease operations in their Fremont, California factory due to the outbreak. Similar cut backs also affected Tesla’s production in Nevada.

However, amid all these challenges, Tesla remains productive at their Shanghai Gigafactory 3. In a new video, viewers get up close and personal with daily operations at the factory.

As you can see, Tesla employees in China are making use of new safety measures that the company rolled out to prevent the spread of coronavirus. Things like wearing masks and practicing social distancing are necessary if Tesla wants to continue producing at its current rate. The type of advanced machinery used for the construction of vehicles in Shanghai makes production both quicker and more efficient.

Tesla’s approach to their Gigafactory in Shanghai represents the larger ambitions of the company at scale. Despite the challenges Tesla faced early in the year, they were still able to report their best ever first quarter performance.

Recent weeks have brought on conversations about Tesla’s price cuts in markets around the world, and now the automaker is pushing a new message on its website for Model 3 leasing. Tesla’s Model 3 is now leasing at prices as low as $399 per month, according to a change on the automaker’s website yesterday, notes […]
Peter McGuthrie
57 mins ago