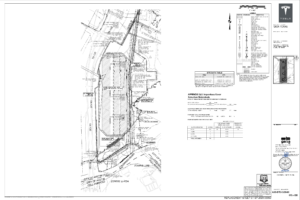 As Giga Texas construction is just heating up, Tesla fans are wondering if it will take as short of a time as Giga Shanghai. So far, the answer looks to be a resounding, “yes.”

The city of Austin, Texas has just released building and permit plans for Tesla’s Giga Texas factory on its website. The news was shared by Reddit user u/rajkhaitan on the Tesla Motors subreddit and comes from a permit application to the city of Austin.

The plans use the address 12733 Harold Green Road in Austin. The current iteration of the plans depicts three buildings that can be seen using the diagonal lines. They also show parking lots to the North as well as an electric utility building to the East.

what a great location

One Reddit user commented, “In terms of factory floor space this and Giga Berlin should be very similar to the world’s biggest plants and produce maybe 4 times more cars per sq ft.” The user continued, “Giga Berlin will have the capacity to produce up to 2 million vehicles per year alone according to German sources.”

Tesla’s new Texas Gigafactory is certainly on track to be built as fast, if not faster than Giga Shanghai, which was completed in a single year. Once it’s completed, the world can expect to see Cybertrucks delivered and a whole slew of new and exciting announcements.

Tesla is planning to add a new showroom and service center in Northern Netanya, Israel, according to a property lease signed by the automaker, reports Globes. The site is located at 39-41 Hakadar Street in Netanya, complete with a nearby store from Chinese automaker Geely Geometry. The property includes about 3,300 square meters (10,826.77 square […]
Peter McGuthrie
17 hours ago

The Motortrend crew recently visited Frito-Lay’s upgraded, zero-emission distribution center in Modesto, California to talk with Tesla Semi drivers and see the truck in person. The publication was able to gather a few extra specs on the Tesla Semi, noting that the huge vehicle sported a Model S Plaid tri-motor powertrain but turned around the […]
Peter McGuthrie
18 hours ago