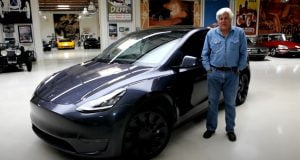 Jay Leno and Tesla have a noted history together. When the electric vehicle maker launched the original Roadster years ago, Leno was there to get all the details. Just a few months ago the television host and automobile lover even took the new Tesla Cybertruck for a spin. Now, in a new episode of his hit show “Jay Leno’s Garage”, Jay Leno takes an in-depth look at the Tesla Model Y.

Leno begins by noting Tesla CEO Elon Musk’s accomplishments in adjacent fields of engineering. He uses Musk’s credibility as a way to reinforce his faith in Tesla’s vehicles, extending the sentiment to the Model Y. At one point Leno references the recent SpaceX and NASA collaboration stating, “if you can put people into space safely and economically, then you can build automobiles.”

The episode spends some considerable time speaking on the Model Y’s battery and range. With an impressive 400 mile battery, the Model Y boasts one of the most impressive range figures available on today’s market. As Leno states, the figure adds up to his experience of driving the vehicle. However, Leno muses on the fact that Tesla’s approach to batteries extends across the vehicles. “The thing that I like about Tesla”, he says, “is they’re just looking for new ways to do everything.”