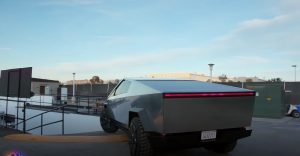 Last week, a segment from Jay Leno’s Garage featuring Tesla CEO Elon Musk and the new Tesla Cybertruck surfaced on YouTube. However, the video was a mere clip cut from a much larger segment. The video ended when the two made the choice to drive the Cybertruck through the Boring Company’s tunnel. Now a new more fleshed out segment on Jay Leno’s Garage shows more footage from the full segment.

Leno begins by addressing some of the concerns related to traditional truck buyers in the market. As Leno states, most truck drivers want their pickup to look and feel like a pickup truck. The Cybertruck doesn’t exactly fit this description with its futuristic body and design features. Senior Design Executive Franz Von Holzhausen joins Leno and Musk to explain some of the preconceived notions related to trucks in general.

The video then proves the Cybertruck’s toughness, showcasing the impressive bed and towing features. At present, the Cybertruck is capable of a 3,500 lb. (1587 kg) payload capacity and a 14,000 lb. (6350 kg.) towing capacity.

Leno and Musk then tackle an incredible undertaking as they drive the Cybertruck into the Boring Company’s test tunnel. In the drive, Musk explains some of the benefits of the tunnel, including a description of his vision for the future of the Boring Company’s tunnel system underground in Los Angeles.

Tesla reported record Q4 2022 earnings today and the automaker also provided an update on its upcoming Cybertruck. According to Tesla, it says “Cybertruck remains on track to begin production later this year at Gigafactory Texas. Our next generation vehicle platform is under development, with additional details to be shared at Investor Day (March 1st, […]
Sarah Lee-Jones
19 hours ago

Tesla appears to have received die casting molds for its upcoming Cybertruck, with parts arriving at its Gigafactory in Austin, Texas. That’s according to bill of lading discovered by Greg (@greggertruck), showing a container from ZDM (Zhenzhi) Machinery & Mould Co. that arrived at Giga Texas on January 16, 2023. The bill notes a description […]
Sarah Lee-Jones
7 days ago