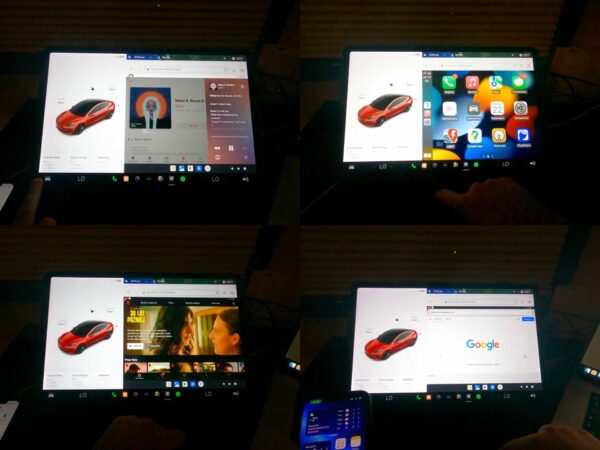 Want Apple CarPlay in your Tesla? A workaround called Tesla Android has been updated to version 2023.4.1, adding Android 13, H264 hardware acceleration, support for DRM and lossless audio and USB tethering for iOS, and more, according to developer and creator @Michael Gapiński.

Coder for the project Michael Gapiński shared the update with Tesla North, which also includes features like improvements to the Flutter App’s performance and CarPlay running on the required Raspberry Pi 4 hardware.

A full list of new Tesla Android features on version 2023.4.1 can be seen below:

“I am pleasantly surprised that the Intel MCU can keep up with it most of the time, I am doing 0 buffering on the frontend,” said Gapinski, referring to lossless audio support on the older CPUs on Tesla vehicles.

Tesla Android added the use of widgets to the app last year, making it easier to view your car’s status from the app on Android mobile.

Tesla’s brand retains customers better than other automakers, and it tends to steal customers from other brands, according to new data shared by S&P Global Mobility last week (via @Umbisam). The data measures a 12-month period leading up to July 2022, looking at how drivers purchased — whether switching to a new brand, or remaining loyal […]
Peter McGuthrie
23 mins ago

Tesla is offering a new discount that could slash prices even further for previous brand owners, with a new trade-in deal available for new Model S and X vehicles. U.S. buyers of the Model S and X who trade in an old Tesla vehicle are now eligible to receive $3,000 off the price tag or […]
Peter McGuthrie
1 hour ago

Tesla has made a Twitter account for its Megapack commercial battery packs, showing as @Tesla_Megapack, and in the bio it says “large-scale energy storage,” as first spotted by @SawyerMerritt (via @Tslachan). At the time of writing, the account has yet to make any posts, has about 1,390 followers and only follows three other accounts: SpaceX, […]
Peter McGuthrie
1 hour ago