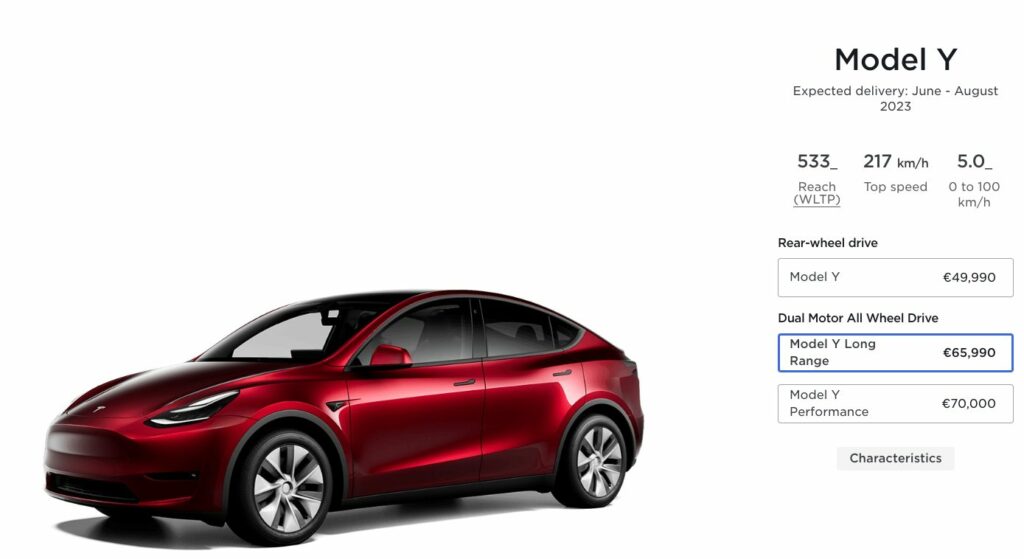 Tesla has started to produce its Model Y available in the coveted new Midnight Cherry Red paint color for buyers in Europe, as of Wednesday morning, as the online configurator now shows estimated delivery estimates. Midnight Cherry Red is available for the Long Range and Performance Model Y, but not the entry RWD Model Y.

Midnight Cherry Red is exclusive to Model Y manufactured at Gigafactory Berlin in Germany, only available to Europe and the Middle East, alongside the other new color, Quicksilver.

The color with delivery estimates was spotted by @Tesla Owners Club France, going for an additional 3,200 euros ($3,435.07 USD). Estimated delivery dates are showing as June-August 2023 for Midnight Cherry Red for the Long Range Model Y.

Tesla’s Gigafactory Berlin-Brandenburg has the only paint shop with the right tech to produce the unique color.

Additionally, Tesla has debuted the unique quicksilver Model Y with a few showroom visits across Europe, which is already available to order.

Some of the first quicksilver Model Y builds were spotted at the Grünheide, Germany plant in November.

In the past, Tesla CEO Elon Musk has explained that these colors aren’t available at other factories, since the Germany plant is able to apply several fine coats of paint for enhanced complexity. One can only dream that these new paint colors will make their way to North America and beyond. Tesla is smart in offering some unique offerings based on regions, as this time around Europe and the Middle East get new paint first, instead of North America or China.

A video from a few weeks ago shows Tesla’s parking lots at Giga Berlin overflowing with Model Y deliveries.