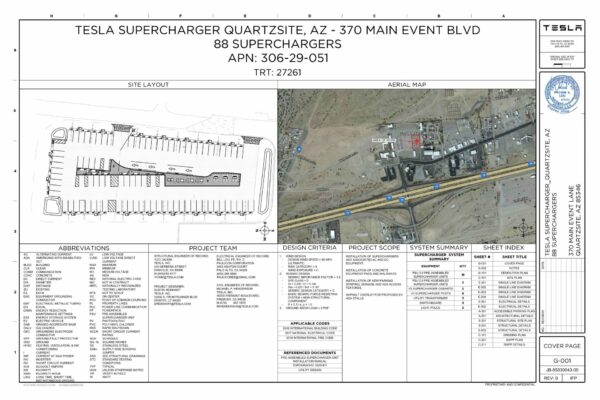 Supercharger expansion plans remain one of Tesla’s top priorities, and the company’s charging network is set to gain a new location in Arizona, featuring one of the largest builds to date.

Tesla filed a permit application to build an 88-stall Supercharger station in Quartzsite, Arizona, as reported by @MarcoRPTesla on Tuesday.

MarcoRPTesla also shared a photo of the building permit, which shows a topographical look at the location on the map, as well as a drawing of what the layout of the Supercharger station is expected to look like upon completion.

In September, it was also discovered that Tesla’s first V4 Superchargers were headed to Arizona, located in Yuma County south of Phoenix.

Reports from earlier this year say that Tesla supplier LG Energy could be building a battery factory in Arizona which would supply multiple automakers.

The news of Tesla’s new Superchargers comes ahead of the automaker’s plans to open its charging network to non-Tesla electric vehicles (EVs), expected to take place by the end of the year according to a White House memo that surfaced in July.

Update: According to Electrek, the site claims Annex is not a real company and the so-called Tesla deal is actually fake. U.S. automaker Tesla is preparing to take hold of its own semiconductor chip supply in China, with a new partnership surfacing to help increase electronics supplies. Tesla is partnering with Swedish chip manufacturer Annex […]
Peter McGuthrie
12 hours ago