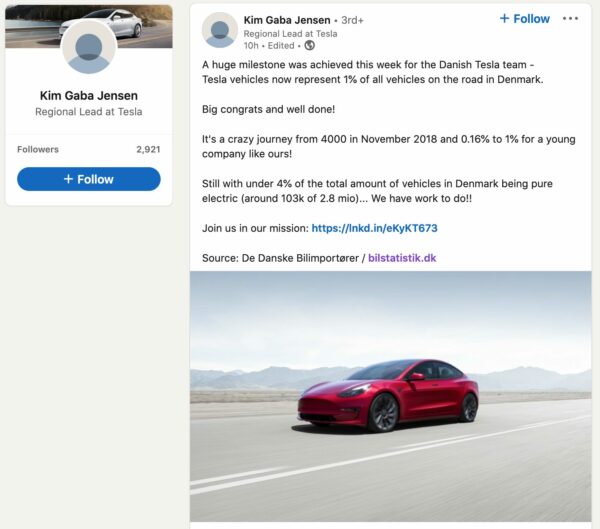 Tesla now represents one percent of all vehicles on the road in Denmark, according to data reported by local outlet De Danske Bilimportører and shared by an employee on LinkedIn (via @Sawyer Merritt).

Tesla Denmark’s Regional Lead Kim Gaba Jensen posted the news on LinkedIn on Friday, adding that there is still work to be done on the electric vehicle adoption rate in the country.

Tesla Model S Plaid in Europe Gets Up to 200 mph Top Speed and Tow Hitch https://t.co/TdtVRVVer2

Denmark passed legislation in 2020 targeting a 70-percent reduction in emissions by 2030, coming as many countries around the world are aiming to shift toward cleaner energy.

The news also comes as electric vehicle competition increases worldwide, with BYD even set to launch its first store in Denmark located in Copenhagen in the remaining months of the year.

Reports show that Tesla is looking to increase ship exports from Gigafactory Shanghai by 60 percent in Q4 of this year, set to deliver around 45,000 vehicles to Europe in the final weeks of 2022.

Tesla Model Y buyers in Australia could bring the SUV’s price down by as much as $10,000, making it as affordable as the Mazda 3 with a new tax deal, according to The Driven. To achieve this level of savings, buyers must qualify for a combination of incentives including the country’s new fringe benefit tax […]
Peter McGuthrie
16 hours ago