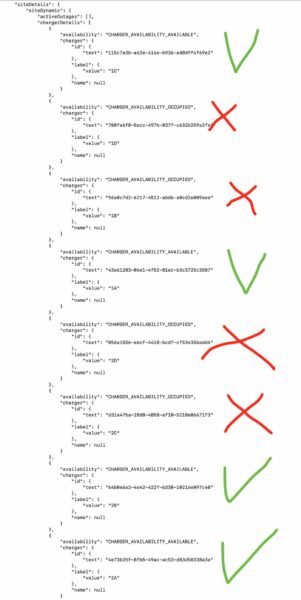 Tesla now sends individual Supercharger stall occupancy information to its users via the mobile app, as discovered by code sleuth @GreenTheOnly in the app’s internal code and shared on Twitter on Sunday.

Green also noted that the aggregation of the code happens car-side, which he says could mean the automaker is getting ready to make the feature public despite it currently only existing in the app’s source code as of now.

In the code, each individual stall includes either an “available” or “occupied” rating, as pointed out in response to one user asking if this was different than seeing the number of available charging stalls.

This is different than just seeing the number of available stalls in Tesla vehicle screens at the moment. Now you may be able to see if a stall is either “occupied” or “available”.

The news comes amidst increasing numbers of Tesla’s vehicles being driven in nearly every market around the world. Additionally, it comes as Tesla opens its Superchargers to non-Tesla electric vehicles (EVs) in many markets, which will likely increase the amount of EVs needing to charge at any given station.

Tesla announced last week that it would be creating a process to let salvaged vehicles begin charging at Superchargers, after previously banning them due to the potential for damaging the charging hardware. The process is set to include inspections and repairs geared toward mitigating any damage to the charging equipment or to the cars.