Tesla Offers Bonus Compensation for Orders in Germany, Ahead of Incentive Cuts 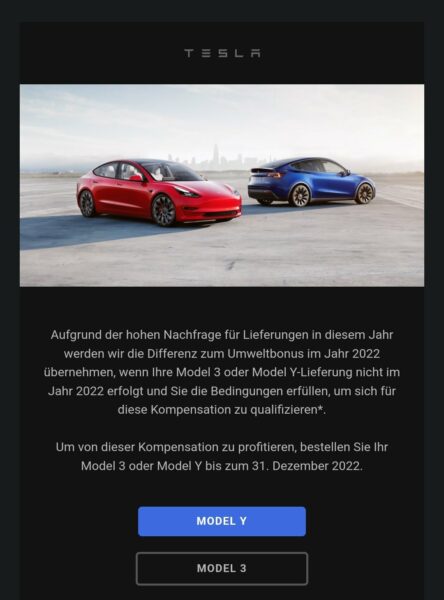 Tesla is offering to offset the cost of reduced electric vehicle (EV) incentives coming to Germany in 2023, saying that it will cover the difference on orders made through the end of the year that won’t be able to be delivered in time, reports @Tesla Adri.

The news came in an email sent to customers, noting that high demand meant the automaker wouldn’t be able to fulfill all of its orders before the incentive is reduced in 2023.

The note, as translated from German, says, “If your Model 3 or Model Y delivery is not in 2022 and you meet the conditions to qualify for this offset, we will cover the difference to the Green Bonus in 2022.”

In order to qualify for the larger incentive, customers must place their orders by December 31.

Users in the thread noted that Tesla saves around 10 percent on import duties made and delivered in Germany, adding that the automaker hasn’t reduced its in-country pricing just yet. The user also predicted that this switch will be timed with the removal of the EV subsidy.

The news comes just a few months after Tesla announced plans to double sales in Germany this year, with the Model Y even becoming the best-selling vehicle in the country for the first time.

Tesla is ‘recalling’ roughly 80,000 vehicles in China due to seatbelt and software issues, according to the State Administration for Market Regulation in a statement on Friday (via The Wall Street Journal). The regulator said that a recall filing had been for Tesla’s vehicles, which is currently the second largest automaker in the country. The […]
Peter McGuthrie
11 hours ago