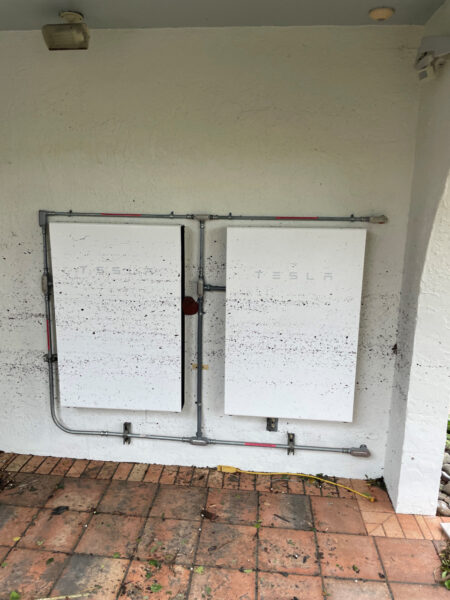 A set of photos shared this week show that Tesla’s Powerwall and Solar Roof are super durable and will continue working after exposure to storms, as noted by one roofing company.

@Tesla retweeted photos of a Tesla Solar Roof and Powerwall that withstood winds and rain from Hurricane Ian on Thursday.

The photos, originally shared by Kelly Roofing, show some of the surrounding damage inflicted on the house by the storm. The company added that the Powerwall was completely underwater for several hours and still works perfectly.

The roof itself also remained on and working, despite winds of up to 155 mph and around 10 feet of water.

Tesla paused solar roof installations in the U.S. in July, with many onlookers wondering if the move is related to raw materials and supply chain issues.

The market has been plagued with supply chain issues, causing Tesla to pause solar installations multiple times this year.

Tesla now requires the purchase of the Powerwall with all solar projects and the company is producing more than ever before.

A report from earlier this month showed that Tesla can build 6,500 Powerwalls and 42 Megapacks in a week at Giga Nevada.

Tesla’s latest version of the Full Self-Driving (FSD) beta can detect certain kinds of Autopilot-defeat devices and the company plans to adapt the version according to new methods discovered over time, reports @Teslascope. If detected using such devices, the FSD beta’s software version 10.69.3.1 will force Autopilot disengagement and it will result in strikes against […]
Peter McGuthrie
35 mins ago