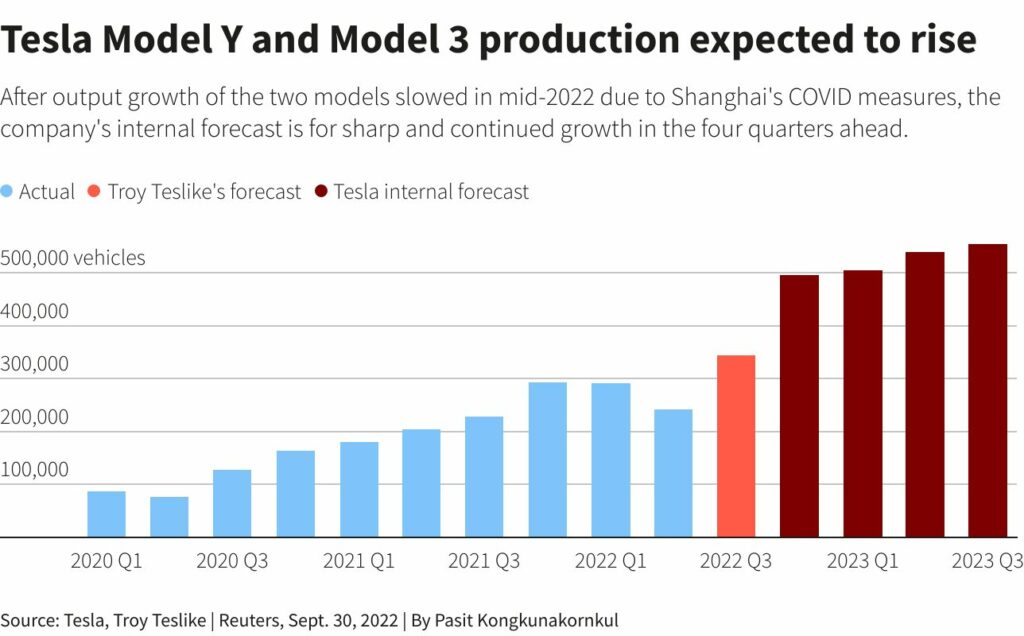 Tesla’s global production of the Model Y and 3 is set for a sharp increase in Q4 with expectations of major growth in 2023, according to internal plans reviewed by Reuters this week.

The growth is expected to happen due to Tesla’s Giga Berlin and Texas ramping up production substantially, putting the company on track for the upcoming goal to reach a similar scale to German luxury automaker BMW.

Still, CEO Elon Musk and Tesla have aimed at targets in the past that were not met. For example, Musk said in April that Tesla would reach 60 percent growth in deliveries, though the automaker has redacted the target to just 50 percent for the year.

The internal growth forecast seen by Reuters, says Tesla expects to build around 495,000 Model Y and 3 units in Q4, with these models accounting for roughly 95 percent of the automaker’s output.

The Tesla forecast would also push past bullish analyst estimates, including that of Wedbush’s Daniel Ives, who predicts 2 million Tesla deliveries in 2023, up from 1.39 million this year.

Reuters confirmed the output target with two sources familiar with the matter, speaking under the condition of anonymity due to the privacy of the subject.

Tesla has Gigafactories in Texas and Germany ramping up Model Y production, with the latter set to become the world’s best-selling vehicle of any kind by next year.

A report on Thursday noted that Tesla is looking to cut prices for the Model Y and 3 in China soon. After a production upgrade at Giga Shanghai boosted production, Tesla sold 77,000 units in China for an increase of 74 percent year over year.